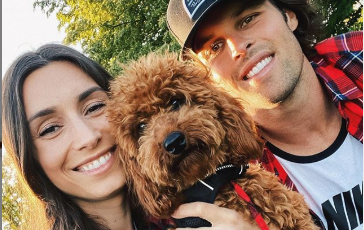 Bachelor in Paradise stars Kevin Wendt and Astrid Loch broke the news they were expecting a new addition. They adopted a dog named Ace together. The couple who got engaged in August of last year rescued the dog from a kill shelter in South Korea.

The two created an Instagram for their new pup. Wendt posted, “we have started an Instagram @thewendtgang for our growing family so we’d love you to follow along for more candid and unfiltered content.” Fans are already starting to follow to see cute puppy pictures and more of one of their favorite couples. A cute video showing Kevin helping Ace go up the stairs was accompanied by a caption. It said, “The best part about Ace being a rescue pup is those small moments where we can tell he’s starting to trust us and knows we have his back.”

The best part about Ace being a rescue pup is those small moments where we can tell he’s starting to trust us and knows we have his back👌🏼Anyone’s else’s pup have trouble with stairs?

Kevin Wendt put pictures of and said jokingly, “Ace had already taken his spot as Astrid’s favorite good boy.” He also asked for suggestions to give the dog a middle name. The couple adopted the pup with help from non-profit organization Bunny’s Buddies. When they found out about the abuse in Asia of animals, they set up a way to rescue ass many as they could.

Astrid also posted on her account according to US Weekly. She said, “now a family of 3. We rescued this sweet pup at the beginning of March and then boom, COVID hit. It’s been a long three months but he’s finally home.” She added his foster parents had him almost all the way potty trained.

Astrid posted a picture of Ace in his dog bed with a homemade welcome sign behind him. She also made a point to say adopting a dog is a huge responsibility and that people should make sure they can accommodate them after quarantine.

Kevin And Astrid Are Not Married Yet

Despite rumors Kevin Wendt and Astrid secretly tied the knot, a rep said they did not. They said, “Kevin and Astrid are not yet married but will be come the fall.” After their engagement, they announced it on their social media. Kevin posted with the caption, “from here on out, we run together. Astrid you are my family, babe. Forever.”

Wendt and Loch met on Season 5 of Bachelor in Paradise. They split up while in Mexico, but got back together away from prying eyes. Loch moved to Canada where Kevin is from. When they announced their engagement, Loch posted a sweet message for Kevin. She said, “I could have sworn the world stood still in this moment. A moment I’ll never forget. Just you + me.” Fans now can follow along with their family on Ace’s Instagram.