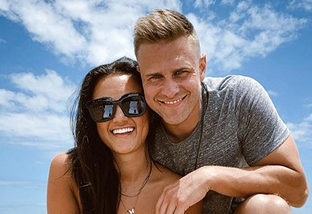 In an exclusive interview with Us Weekly, former Bachelor in Paradise star Sydney Lotuaco spilled details about her new relationship. She admitted that she met her new boyfriend, Nick Wehby, via social media. The BIP alum revealed that Nick started out as a fan and the two eventually became lovers.

Nick fell in love with Sydney while watching The Bachelor

Sydney told Us Weekly that Nick’s mom convinced him to watch The Bachelor with her. He quickly developed a crush on Sydney. Then, he started watching Bachelor in Paradise to see more of Sydney. At this point, Sydney was going out with Mike Johnson. However, he broke up with her toward the end of Season 6.

Nick then decided to shoot his shot on Instagram. Sydney explained, “He’d always respond to my question stickers with really funny things, and it intrigued me.” The two began talking in March via Instagram DMs. Later, they graduated to texting and then decided to meet on FaceTime. Finally, after three months of getting to know each other online, the former BIP star finally met up with Nick in person.

Sydney has been quarantining with her family in Virginia. When she and Nick decided to meet up, Sydney flew from Virginia to Nick’s hometown in Ohio. Sydney admitted that she was a little nervous to meet him at first. She worried that things would be different in person than on the phone. Fortunately for them, it was quite the opposite. Sydney told Us Weekly, “It was even better in person.”

The couple is happy to be able to do normal couple things now that they have finally met in person. According to Sydney, she and Nick enjoy, “just simply watching funny movies, cooking, or just being together and being able to touch because you obviously can’t over the phone.” When their time together was up, Nick drove the BIP alum all the way back to Virginia.

On June 18, Sydney posted a beach picture with her new boyfriend. She captioned the Instagram post, “2020 ain’t all bad,” and added a blushing emoji. Fellow Bachelor star Tammy Kay Ly commented, “Oooo girl. You guys are cute af.” Other celebrities and fans also seem to approve of the new couple. The comments section was filled with compliments and heart emojis.

Based on Sydney’s and Nick’s huge smiles in their picture together, fans can assume that the two are very happy together. While describing Nick to Us Weekly, the BIP alum gushed, “He has incredible character. He’s honest, loyal and wears his heart on his sleeve. He makes me laugh a ton and gets me to open up more and truly be myself.”

What do you think of Sydney’s new relationship? Let us know in the comments and check TV Shows Ace for more updates.

Who Is Teddi Mellencamp Pulling For On ‘The Bachelor’ This Season?
Netflix’s ‘Gabby’s Dollhouse’ Season 2: Canceled Or Renewed?
Woman In Middle Of Dale Moss, Clare Crawley Split Identified
‘My 600-lb Life’ An Update On What Happened To Brittani Fulfer
‘Chilling Adventures Of Sabrina’: Kiernan Shipka Comments On Her Character’s Fate