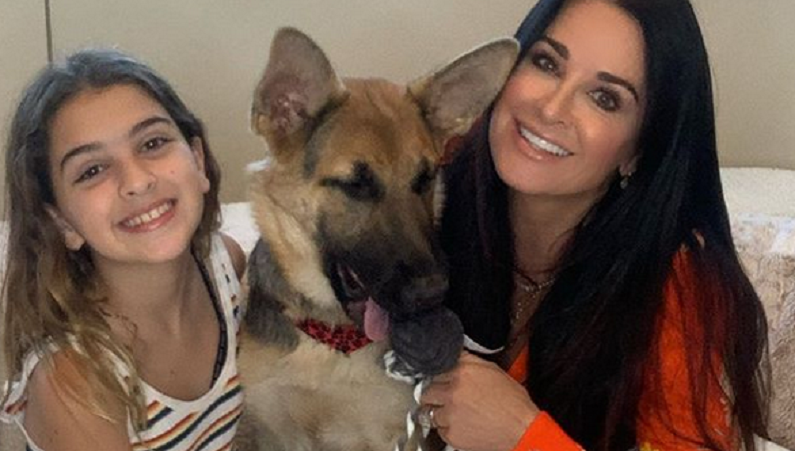 RHOBH fans slammed Kyle Richards for her “tone-deaf” throwback post. Throwback Thursday it’s not. The Real Housewives of Beverly Hills star posted a photo on Instagram on Wednesday, June 17 that didn’t sit well with her followers. Some of them flocked to the post, calling it insensitive in light of recent events.

Kyle posted a throwback photo of herself in Greece. The post in question seemed innocent enough. She wore a white crochet one-piece swimsuit, oversized sunglasses, and a smile on her face. But it’s the timing of the post and Kyle’s caption that has many followers upset.

Per The Blast, most critics picked apart the most amid the Black Lives Matter movement and the coronavirus pandemic. In the post, Kyle Richards revealed that she miss[es] “escaping from reality.” She included the hashtags “Greece” and “RHOBH.” While most of Kyle’s fans loved the throwback photo, others lashed out at the RHOBH star for the insensitive post.

Some of them advised that she should think before she posts on social media. This comes amid the ongoing Bravo firings. Kyle didn’t ignore the trolls. Instead, she used her platform to slam them. One follower wrote, “Uh tone-deaf,” to which she replied, “no. Not at all.”

But not everyone agrees with Kyle. They feel that this post is “missing the mark” amid current events. Most of them agreed with that follower that Kyle’s post was “tone-deaf.”

Tonight's episode is from when we took this photo at my house (Denise had not arrived yet. I know you'll ask so I'm clarifying why she's not in it ) It started out really lovely but went downhill from there. By the end of the night I was DONE as you can see from the last picture 🥴😂 shout out to @wondertentparties @casablancarestaurantvenice who are small businesses that I love and support and think they deserve some love 👏🏻👏🏻👏🏻 #rhobh 9/8c

“When someone wealthy and privileged as yourself posts, at a time like this, that you want to escape reality… it really just misses the mark,” someone else said. “I hope you’ll consider this.”

Kyle hasn’t removed the post. She defends what she said. As TV Shows Ace previously reported, Bravo fired five reality stars from the network for their racist comments. The latest one was Below Deck Mediterranean star, Peter Hunziker. Last week, Bravo fired Stassi Schroeder, Kristen Doute, Max Boyens, and Brett Caprioni. Fans are asking the network to fire several stars, including Jax Taylor, Brittany Cartwright, Lala Kent, Kelly Dodd, and Kim Zolciak-Biermann. The Bravo fans are on the attack and they’re closely watching the stars this time around.

Kyle Richards does not want her daughters on reality television

The RHOBH star revealed in an interview with Australian TV Week Magazine that she “would strongly advise against” her daughters wanting to get into reality television.

“I wouldn’t let them,” Kyle said, per Daily Mail. “Two of my girls are in real estate – they’re businesswomen, and I like that they’re on that path.”

Kyle celebrates 10 years on The Real Housewives of Beverly Hills this October. However, she doesn’t want to be on there for another 10.

“Absolutely not. I wouldn’t survive!” she joked.

Our youngest @portia_umansky graduated today. Leaving behind the school that my husband also attended when he came from Mexico as a child and 3 of my 4 girls also attended . I have been driving up to that carpool every day for 16 years and now we are leaving. Portia is going to a new school for 7th grade! We are so proud of you Portia!! My whole family cried our eyes out today. We will miss the love & sense of community we had at @wiseschoolla and the amazing teachers and faculty. Thank you for helping us educate and raise our children. I'm sad we were not able to hug goodbye today but know you are so appreciated and adored ❤️ #thankyou #ittakesavillage #wiseschool

Season 10 of RHOBH introduced Garcelle Beauvais and Sutton Stracke. It also saw the return of Denise Richards, Dorit Kemsley, Erika Jayne, Lisa Rinna, and Teddi Mellencamp. This season has also been the worst for Kyle, who has been attacked left and right.

What are your thoughts on Kyle Richards’ latest Instagram post? Do you feel that it was “tone-deaf”? Sound off below in the comments section.