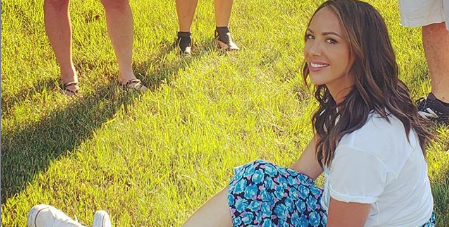 Kristen Doute has not posted to her social media since the news broke she had been fired from Vanderpump Rules. She and Stassi Schroeder got the ax after former castmate Faith Stowers revealed they’d wrongfully called the police on her. She stated the reality stars had targeted her and she heard about it from Stassi herself on a podcast.

Brittany Cartwright has also been facing some backlash for the role some fans think she and her husband Jax Taylor played in that scenario. Jax has a history of racially insensitive and just plain offensive tweets. Her mind has been elsewhere because her mother is in intensive care after suffering complications from bladder surgery.

Kristen Doute Asks For Followers To Pray For Sherri Cartwright

Kristen Doute posted on her Twitter, “please everyone keep @BNCartwright momma #SherriCarwrig3 in your prayers, thoughts, spiritual/higher power thoughts… whatever it is you believe in.” Aside from reposting an America’s Got Talent video, Doute has been silent.

According to US Weekly, a source said, “Brittany is beyond overwhelmed. Her mom is in the hospital, in the ICU, and that matters more than anything else. Imagine dealing with that and combating comments calling her a racist, when she is anything but that?”

Faith Stowers revealing how she’d been treated by the cast directly led to Kristen Doute and Stassi’s firing. Two other cast members, Max Boyens and Brett Caprioni, were fired for different racist comments. Reportedly Faith accused Brittany of using racial slurs agaisnt her. Cartwright said, “I had NOTHING to do with that. She knows I don’t have a racist bone in my body.”

Stowers said, Kristen did reach out, but she questioned her motives. She said, “After a lot of pressure from their supporters and Vanderpump supporters, they decided to DM me. And when I say they, I don’t mean Stassi. I mean Kristen Doute, and I believe her name is Jackie Schimmel, who runs ‘Bitch Bible’ podcast.” She reportedly didn’t accept their apology.

Fans will remember that Faith Stowers slept with Jax Taylor while he was with Brittany. The source said Cartwright is, “getting hit at all angles.” For Kristen’s part she hasn’t publicly addressed the firing or the allegations against her. She likely knew Brittany needed the support which caused her to break her silence. Fans have called for Jax Taylor’s elimination from the show saying he had a hand in the situation like Stassi and Kristen. Fans are watching to see how Jax and Brittany address things once her mother is out of danger. There also is a feeling this isn’t over. As more Bravo fans speak up, these firings could just be the tip of the iceburg.