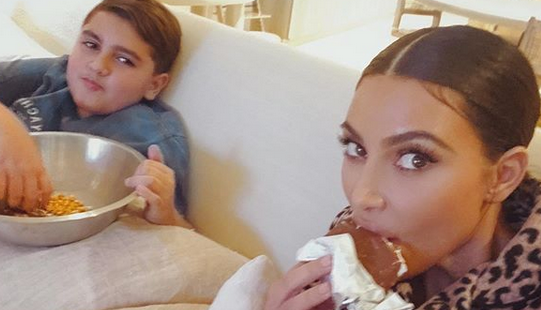 Keeping Up With the Kardashians star Kourtney Kardashian is known for following a strict keto diet. She doesn’t allow her children to have anything with dairy or gluten in it. She also tries to avoid sugar in their diets. But, when their aunt, Kim Kardashian West, babysat them, they got to indulge in a treat. Kim posted a selfie with her nephew, Mason, on June 17 while the two were enjoying some snacks.

Kourtney’s kids have been on a diet for years

Kourtney used to have a blog, on which she shared that she and her kids avoid dairy and gluten. She said that they all had testing done to find food sensitivities. It turned out that they had gluten and dairy sensitivities. After she got the test results, she decided to find gluten- and dairy-free alternatives to the foods they normally eat.

Kourtney said that it wasn’t difficult to find replacements for their favorite foods. She even came across gluten-free waffles and dairy-free cheese. Now, her three kids, Mason, Penelope, and Reign all follow a mostly gluten- and dairy-free diet.

Aside from special occasions – and apparently hanging out with Aunt Kim Kardashian – Kourtney and her family are pretty strict with this diet. She explained that after avoiding gluten, even small amounts can disrupt the body’s systems. So, the family sticks to their diet as much as possible.

Kourtney even found ways to bring gluten- and dairy-free snacks on vacations. However, she makes sure to give her kids options and encourage them to choose healthier foods. She also admitted that there are times when they don’t follow their dieting rules at all. She told Health, “When we go to Disneyland, we eat whatever; we’re not bringing our own snacks!” While she tries to prioritize health, she understands the importance of a flexible lifestyle.

In Kim’s Instagram post, it appears that she and her nephew, Mason, ditched the diet for a night. She munched on a chocolate dessert while sitting on the couch with Mason, who was eating a snack out of a bowl. Kim captioned the post, “When I baby sit…” She then reposted the selfie on Twitter.

When I baby sit…

Kourtney didn’t reply to either post. However, fans on Twitter pointed out that Kourtney wouldn’t approve of what Kim Kardashian fed the kids. One user said, “I hope all of that is gluten and sugar free. Kourtney about to beat on you if it isn’t,” with a laughing emoji. Another joked, “im telling kourtney…” Hopefully, Kim’s sister will still let her babysit in the future.


How do you think Kourtney will react to her sister giving the kids sugary treats? Let us know in the comments.

Lifetime’s ‘Envy: A Deadly Sins Saga’ Is Second In Series
Audrey Roloff Shares Adorable Snaps Of Bode As He Grows Up Fast
Frustrated Fans Are Over Danielle Busby & Here’s Why
How Religion Kept Colton Underwood In The Closet
Jamie Otis Of ‘MAFS’ Gets The All-Clear From Her Doctors Finally!