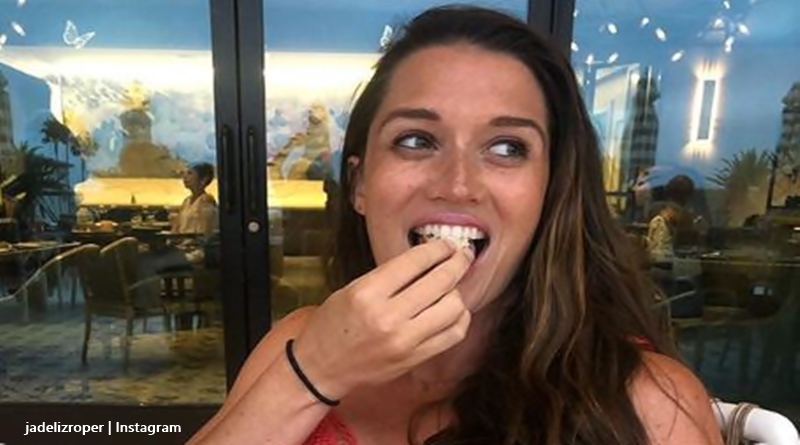 BiP alums Jade Roper and Tanner Tolbert already have two adorable kids, Emmy and Brooks. They announced their third child’s on the way in mid-May. Now, Jade took to her Instagram and updated her fans as she hit 17 weeks along. Slow to share the original news from fatigue and illness, it sounds like she still struggles with that a bit.

Back in  May, Jade said she felt unwell with this pregnancy. Mainly, she felt tired and ill. And, it seems that continues. Once more, she said she’s been slow with updates as her “energy” levels feel rock bottom. Plus, she suggested that the couple plans for no more babies after this. In her post, Jade wrote, “I’m thinking this is our last baby.” While tired and not feeling well, it seems though that the worst of it passes now. She said that mainly she feels ill at night.

First little flutters start and it sounds like Jade looks forward to meeting her child. That mainly comes in the “mornings.” The Bachelor in Paradise alum noted, “little baby likes to make a [morning] appearance and I…feel some tiny flutters!” That’s actually an exciting feeling for any mom.  For now, Jade simply soaks up “every moment” of this baby. After all, it might be the last time the BiP alum feels new life growing in her.

Tanner and Jade plan a trip to Oregon

In the background of the photo that Jade shared of her baby bump, the place looked a bit untidy. The Bachelor in Paradise star said that’s because they pack up for a trip to visit with family. It sounds like a huge undertaking for a pregnant mom. She wrote, “Wish us luck on a 1,000 mile drive with two tikes! 💗.” Some fans commented on Oregon. Certainly, it seems like the couple already found plenty of fans in that state. Some of them hope the couple brings warmer weather with them as it’s chilly there.

Other BiP fans noted that for now, Jade’s bump’s still tiny and cute. In fact, she looks like she just ate an enormous meal, rather than carrying a baby. Others suggested that Tanner and Jade should definitely go for another child. They pointed out that families with three kids always end up in lopsided arguments. Jade loves being a mom but doesn’t sound sold on carrying more babies. She replied, saying, “I don’t know if my body can handle carrying another 😅😅.”

17 weeks pregnant! Haven’t been good at doing these little bump-dates, but hopefully I’ll have more energy soon to take cute pics! I’m thinking this is our last baby, so wanting to soak up every moment (laughing at myself when I say this cuz our kids keep us crazy busy lol) and document everything since it’ll be the last of the firsts. My nausea only revisits me at night now, and the mornings are my favorite because little baby likes to make a bigger appearance and I can feel some tiny flutters! Also, please don’t mind the mess! 🙈 We are packing to go see family in Oregon! Wish us luck on a 1,000 mile drive with two tikes! 💗

Hopefully this time, the ABC alum experiences an easy birth. Recall, when Brooks came along, he arrived so suddenly she birthed him in the closet of their home.

What do you think about BiP star still feeling low energy levels, but at least not feeling sick all the time? Would you drive 1,000 miles to visit family with two tiny kids and another on the way? Sound off in the comments below.