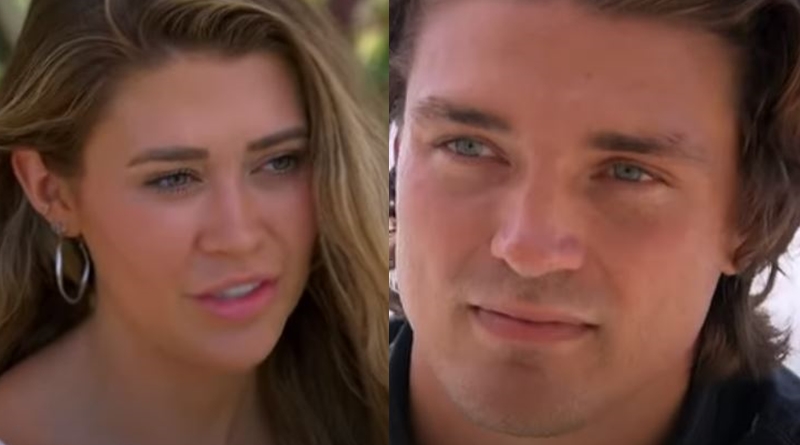 BiP fans can’t get over Caelynn Miller-Keyes. Dean Unglert shared a photo of her roped up and climbing a mountain. They know that heights really worry her. But, it seems she’s determined to conquer her fear: Even if it means going way outside her comfort zone. Dean shared a stunning photo of the mountains in the background.

Dean shared his photo of Caelynn mountain climbing on Wednesday night. The angle of the picture really shows the height of the hills around them. Some fans wondered how he managed the angle. One asked, “Are these drone pics? How did you take these pics while belaying her?” Dean replied, saying, “I got creative with belay locations 😅.” Many impressed fans wished they could push themselves like Caeynn does.

One BiP fan wrote, “You came back and she left with you to have this Journey. What a beautiful one thus far. So happy for you too ❤️🙏❤️.” Recall that during Bachelor in Paradise, Dean left the show. But he returned and ever since then, the couple have stayed together. Fans love their relationship and hope that one day they marry. They also love Pappy, the dog they adopted from a shelter. One fan asked if Pappy went out with them to Mount Charleston. Yes, he sat “patiently” at the bottom of the cliffs, Dean said.

In early June, rumors started that Caelynn and Dean broke up. They started with Dean who said he stayed in his van for a while without anyone else. And, fans noticed Dean doesn’t follow Caelynn on Instagram. In fact, that subject came up again on his post showing her mountain climbing. But Dean just shrugged it off. Certainly, if Dean and Caelynn spend time in the mountains together, they probably love and trust each other. After all, climbing’s not exactly free of danger.

Bachelor in Paradise fans really hope these two pull through as a couple. They also love that Dean pushes her out of her comfort zone. One fan addressed Caeylnn in their comment. They wrote, “Who ever thought that when you went with your heart with Dean, you would [meet] someone that challenges you physically and have had such great travels. Pageant girl gone natural! Love it!” Other BiP fans agreed, if they could turn back time, they’d do exactly the same thing.

The original split on BiP

Cosmopolitan reminds readers that the couple nearly ended their relationship for good The couple looked perfect together, but Dean left. He just up and went, feeling he wanted Caelynn or no-one on the show. When he surprised her by returning to the beach, she left with him. For ages, they kept their relationship secret, so as to not spoil the show. Nowadays, the BiP couple seems strong despite rumors. They often share about their life with Pappy the dog, and their many travels into the wilderness.