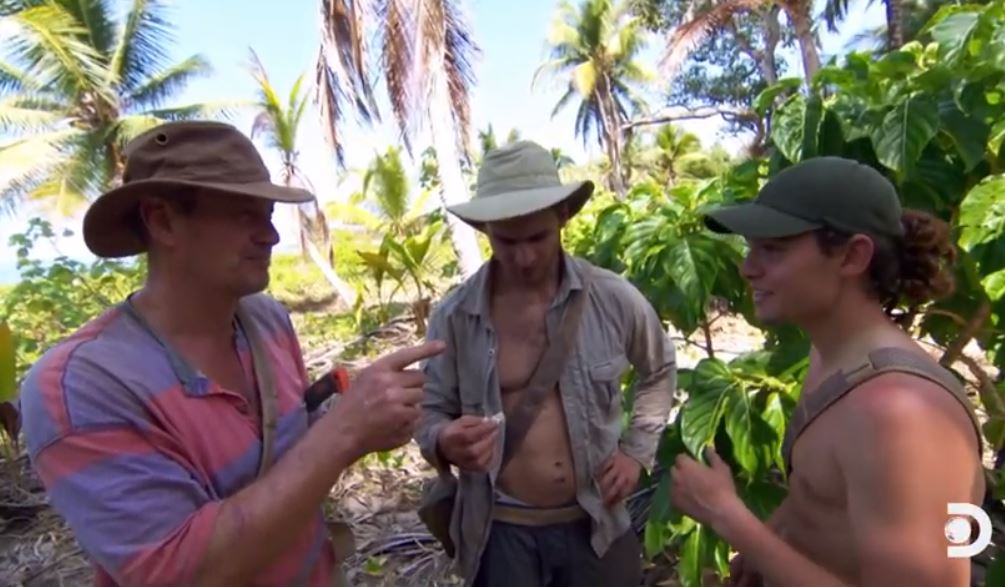 On Thursday’s Treasure Island with Bear Grylls, we are headed out on a deserted Pacific Island as a 100,000 pounds sterling is dumped from a chopper in wrapped packages and is stashed in various points of a remote island, and twelve people are hot to find it all.

TV Shows Ace has an exclusive preview that features three contestants… and two have a big secret. The three men, Marco, Ivar and Jack, are dying of thirst and unfortunately cross paths with a Vomit Fruit Tree.

Already some of the Treasure Island contestants have found bits of money, and they aren’t talking.

What happens on Treasure Island?

TV Shows Ace has an exclusive preview of Thursday night’s second episode.  In it we observe three men who are in search of water, ex marine Marco, almost royalty Ivar and Jack are searching for another water source. What they do find makes them wish they had water to rinse out their mouths.

Only strapping Marco and posh but poor Ivar have stumbled on to some cash and they are keeping quiet.

But their search yields a discovery, the infamous Vomit Fruit—a staple of British reality TV shows involving survival apparently—that is about as foul as fruit can get.

The men liken the flavor to a heady combo of vomit and blue cheese with a side of funkitude.

What is Treasure Island about?

As you saw in the premiere, twelve Brits are stranded on this island and have no creature comforts to rely upon. There’s even a florist who is 75 years-old who is part of the group.

The idea is to see if the come together as a group and share the spoils and work as a team to gather all the money, or if they split up, divide and conquer and deceive their peers. Lord of the Flies but with a wide swath of ages, backgrounds and abilities.

Already the negative aspects of Ivar’s “eff ’em” personality are showing and it’s not pretty. We learned that Ivar is royalty-adjacent, related to Prince Phillip on his dad’s side. In the series he informs us that despite the cousin connection and assumptions of wealth, “cash is always tight.”

On Treasure Island, host Bear Grylls has shared that there are sharks, crocodiles, snakes, scorpions and hunger and thirst to look forward to. His one rule: If you leave the island before the end, you leave with nothing.

The contestants get basic tools, a 24 hour supply of water and little else.

They will be filming each other with the help of six camera people.

Tune in Thursday night to see if Ivar can get away with keeping his secret, or if Marco blabs to the group.