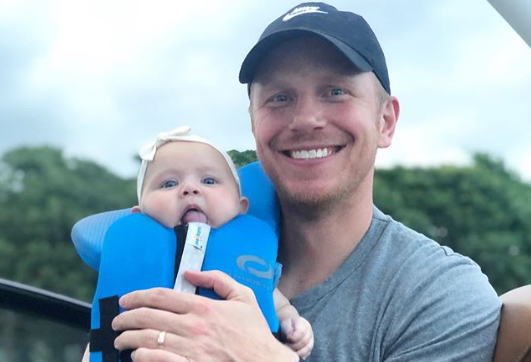 Matt James is going to make history as the first ever black Bachelor! Sean Lowe is giving him some advice after he successfully found Catherine Giudici on his season. Lowe said he’s given advice to all the leads, because of his success which is funny. He said, “I’m not sure how that advice has been received, but I would just say to have fun, try to be yourself.”

Sean Lowe was third place on Emily Maynard’s season of The Bachelorette. He was one of the men fans really routed for. It couldn’t have been easy for Emily to make that decision to send him home. After going through that in 2012, he became The Bachelor the next year. There he met Catherine and fell in love.

He proposed to her at the end, and they were married the next year. They now have three children under four and are a great example of Bachelor success.

I’ve laid off social media for the last several days. Didn’t have the words and I guess I didn’t want to come across as self-serving by posting something without giving it serious thought. Not to mention, I’m fairly certain most of the world does not care what a former reality TV guy thinks about anything- much less something as heavy as this. But I know I have a voice and I know I need to use that voice for what is right. I still don’t think I can properly articulate everything I’m feeling but I’ll start with this… As a Christ-follower, I see the world and its brokenness through a different lens. Here’s what God’s word teaches us- weep with those who weep (Romans12:15), love one another as I have loved you (John 15:12), love your neighbor as yourself (Mark 12:31) and the Lord is near to the broken-hearted (Psalm 34:18). In other words, we are COMMANDED to love and empathize with our black brothers and sisters who are hurting, who are mad, who feel unheard, who are grieving, who are scared, who feel mistreated. My children will not know how it feels to be black but they will definitely be taught how to love their neighbors (ALL neighbors) and empathize and weep with those who are weeping because our creator who loves us so much also wept with those who were hurting (John 11:35).

What Advice Did Sean Lowe Give To Matt James?

Sean Lowe told People his advice for James is to focus. He said, “There’s going to be a lot of distractions: cameras, sound techs, producers and all of that. Just try to be yourself, because you needs to focus on the women that are there.”

He said the hard part starts when the show is over, because if he proposes then that needs to be the focus. He doesn’t need to let all the other stuff distract him from her. If the last season of The Bachelor proved anything, it’s that drama can reign supreme with that many young women together in one place.

Sean Lowe offers some good advice. James is also thanking another Bachelor Nation favorite, because she spoke up for diversity. Rachel Lindsay, as the only black lead on The Bachelorette, urged ABC to take a hard look at their stance on diversity.

James said, “When Rachel speaks, we listen. She has a very important voice in all this, being the first black woman, person of color to be a lead, and… this is hopefully the first of many black men to be in the position I’m at now.” With the announcement, Matt, would be the next Bachelor, ABC released a statement. They said, “we know we have a responsibility to make sure the love stories we’re seeing onscreen are representative of the world we live in. We are proudly in service to our audience.”

Matt James is a former NFL wide receiver who originally was ready to be a contestant on Clare Crawley’s new season of The Bachelorette. He said, “it’s an honor. I’m just going to lean into myself and how my mom raised me. Hopefully, when people invite me into their homes on Monday night, they see that diverse love stories are beautiful.”