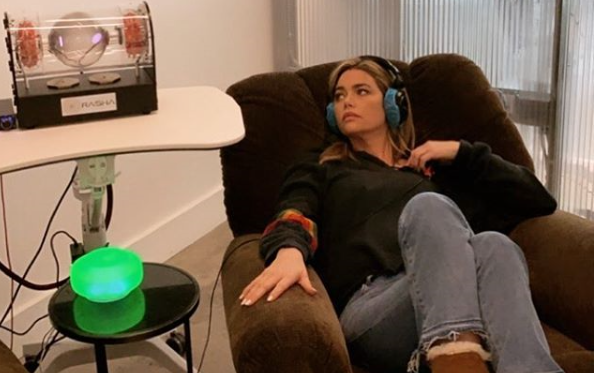 Denise Richards is assuring RHOBH fans there is still plenty of drama to come on this season of housewives. New episodes are airing in July after a brief hiatus. Denise opened up to The Jess Cagle Show about the difference between her first and second season of the show.

She also talked about why she believes the show is on hiatus. As fans know the most recent episode ended with she and her husband storming out of Kyle Richard’s BBQ. The star had been accused of mom-shaming when she didn’t want her daughters to hear certain conversations from the women. She told Garcelle Beauvais that’s why she didn’t bring them to the party. Kyle overheard her and called her out in front of everyone.

Hubby shooting something really cool at his center @q360club so happy for him🙏🏻 he helps so many people and is the most selfless & giving person I’ve ever met. ❤️ @aaronwilliamcameron

Denise Richards Said She Went Into Season One Naïve

Denise Richards said she, “went in very naïve, I think, the very first season. I want to be myself, because some people do know of me and I didn’t want to play a character, otherwise let’s call it scripted.” She said she wanted to react naturally to whatever happened.

The first season of Real Housewives of Beverly Hills was great for her. She said she enjoyed getting to know the women according to People. The season was a lot of fun. When it came to Season 2, she struggled a bit more. She enjoyed going on fun trips and fancy restaurants. Denise said she, “genuinely formed some great friendships.”

She said it has been, “a different experience. But, you know, people are watching, so that’s good.” She wanted to put any rumors she quit filming to rest. Denise said, “we wrapped in December. I missed two parties… towards the end, so I didn’t stop filming.” A lot of controversy has surrounded Denise with Brandi Glanville saying she had an affair with her. Denise has denied it, but fans are wondering if they will see any of it play out on the show.

Why Denise Thinks The Show Is On Hiatus

Denise Richards said she thinks COVID 19 is the reason they are on the break. The virus has delayed the filming of the confessionals. After filming wraps for the season, the stars film the confessionals to be edited into the show.

She said, “we just recently started doing them where we’re filming ourselves basically. We have someone come in and set everything up with a mask… so we got behind for that.” Denise said the confessionals need to catch up with the episodes. Meanwhile the reruns of the show have included watch parties with some of the girls.

Fans can’t wait to get the whole story and see the rest of the season when it returns to new episodes July 8th.

Ashley Iaconetti Of ‘BIP’ Shared What Scared Her Early In Pregnancy
Chrishell Stause Vacations In Paradise With Her New Man — Who Is It?
Is This A Sign ‘Bringing Up Bates’ Will Be Canceled?
RHOBH’s Lisa Rinna Argues Daughter Amelia Gray’s Lips Are Natural
‘DWTS’ Pro Alan Bersten Shows Off Stunning Transformation Online