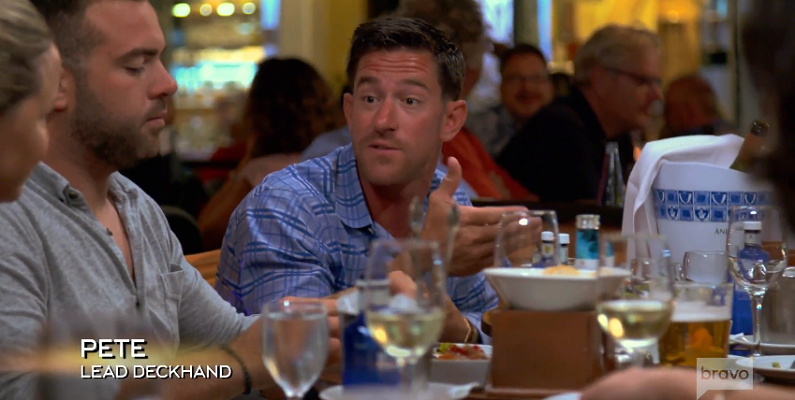 Below Deck Med lead deckhand Peter Hunziker is the latest Bravo star to lose his job. The Bravo firings are reportedly ongoing. This report comes on the heels of the Vanderpump Rules firings that broke the internet last week.

On Tuesday, June 9, Bravo fired Stassi Schroeder, Kristen Doute, Max Boyens, and Brett Caprioni for their racist comments and actions. This comes amid the nationwide protests for the Black Lives Movement. Bravo released a statement stating that it stands with the Black community. The network announced that Peter Hunziker is the latest Bravo celebrity to get the boot. Read on for the latest details.

On Wednesday, June 17, Bravo fired Peter Hunziker from Below Deck Mediterranean. The lead deckhand is on Season 5 of the reality series. The network made the announcement on Instagram.

“Peter Hunziker of Below Deck Mediterranean has been terminated for his racist post,” the Instagram post read. “Bravo and 51 Minds are editing the show to minimize his appearance for subsequent episodes.”

Peter joined Below Deck Med as a deckhand on the series, which premiered on June 1. However, there are no details on BravoTV.com about the post in question. The decision was quickly made as soon as the network discovered the post. Since the show is in post-production, Bravo will reduce Peter’s role in the second half of the season.

Peter isn’t the only reality star who’s out at Bravo. The firings are not over. Per All About the Tea, Andy Cohen addressed the Vanderpump Rules firings. He teased that a major shakeup is coming to the network.

“There’s so much happening in the Bravo universe,” Andy explained on his SiriusXM’s Radio Andy. “I will say this: so much talk about Vanderpump Rules and of course the reunion ended up airing last night. I absolutely support Bravo’s decision, I think it was the right decision. And I want to remind people because I’ve been getting so many tweets and messages and whatever about Vanderpump Rules and about Southern Charm and other shows.”

The Force is strong in this one…

Andy says he has no pull on the decisions. He’s no longer in charge of programming. He’s also not the Executive Producer of Vanderpump Rules. Andy has nothing to do with the show aside from hosting the reunions. He also hinted that there are more Bravo firings to come.

Below Deck Med viewers took to Bravo’s Instagram post to offer more suggestions. Most want Kelly Dodd from The Real Housewives of Orange County to get the boot. Others are also calling for the firing of Jax Taylor and Brittany Cartwright. Fans want to know how Jax lasted this long for his inappropriate behavior.

What are your thoughts? Who do you think should get fired next? Sound off below in the comments section.