Whitney Way Thore shared about her ex-fiance Chase and how he got another woman pregnant. Since then, shes’ been very quiet about the split. But, in a special for TLCme, she spoke up a bit more about it. With Buddy comforting her now, she feels in a better place. But, she’s not ready to talk to Chase right now. Furthermore, she stressed so much, she ended up at the hospital.

Whitney Way Thore heard about the baby via the phone

When Whitney told her fans about the split, she said she wanted to settle any gossip and speculation. It seemed difficult for her to talk about it, but she wanted the news out of the way. But, she never mentioned how she got the news from Chase. Fans already heard that Whitney stayed with her mom during quarantine, and Buddy popped over often with groceries. He also checked out the dogs. Since then, fans heard he stays with her and helps his friend.

That came about after Whitney heard about Chase and his baby. The Ashley’s Reality Roundup noted that Whitney said on the special, she heard from Chase about the pregnancy via the phone. That might sound very harsh but Whitney admitted she pushed for him to tell her why he called. Chase wanted to see her. But, because of the coronavirus quarantine, she chose not to see him in person. So, when she told him to just tell her what’s going on, he did. Shattered, Whitney Way Thore sounds like she never expected the baby news. 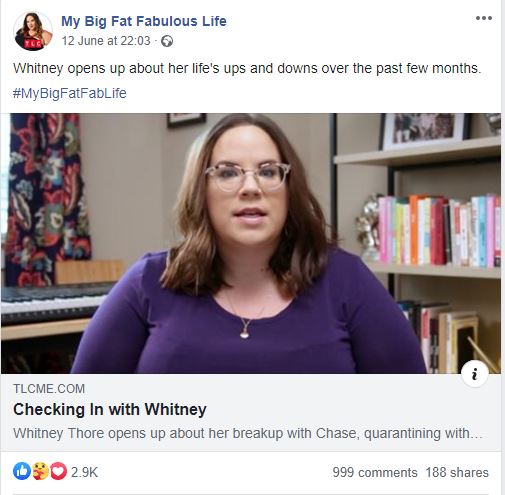 Stressed, Whitney ends up in the hospital

The news freaked out Whitney so much, the My Big Fat Fabulous Life star called an ambulance. She suffered from a panic attack and spent a few hours at a hospital in Charlotte. However, getting home again presented a problem. Her brother couldn’t help her, so she called Buddy. Whitney said, “he drove from Greensboro to pick me up from the hospital and was just going to stay for a few days.” Well, fans know he stayed much longer. In fact, rumors surfaced on social media that a new MBFFL season might feature them falling in love.

Whitney still can’t talk to Chase about the baby, She noted that she just can’t deal with it right now. Buddy helps her, and as she returned to the hospital a second time, she’s grateful for his company. Over on Facebook, fans reacted to Whitney. One said, “Chase just used Whitney for fame. I really didn’t think he would stay in that relationship with her. Whitney, you are a beautiful woman, you will find true love one day!❤️.”

Other fans on Facebook wish that Buddy and Whitney could become an official couple. One My Big Fat Fabulous Life fan noted, “Whitney, you and Buddy belong together.” But another follower thinks they should remain friends only. They told Whitney Way Thore, “Buddy is a great friend to have, but, as a partner he can’t even take care of himself. He’s not stable emotionally, or financially. You don’t need a man child to raise. You should just keep him as a dear friend.”

What do you think about the news that MBFFL star Whitney didn’t talk to Chase since that phone call? Do you agree that Buddy’s a great friend and should just remain a friend to Whitney Way Thore? Sound off in the comments below.