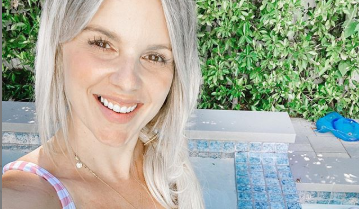 Ali Fedotowsky shared a picture of herself next to the pool in a swimsuit. She wanted to share a message about accepting your flaws, because she’s proud. The thirty-five-year-old mother of two appeared on The Bachelorette and gained lots of fans who support her.

Ali was the Bachelorette in 2003. She left the show engaged, but the relationship didn’t work out. In 2017 she married Kevin Manno and the two have a daughter and a son together.

Fedotowsky dedicated herself to a fitness routine and felt good about sharing the picture. She wore a pink and white two piece with stripes. There was a video she included with the post where she slapped her belly and said she had an eight pack. She captioned the picture, “I am SO DANG PROUD of MYSELF!!!! I think sometimes we are afraid to say that about ourselves. I’m not really sure why. I think it’s more of a woman thing. For all our lives we are taught not to be boastful about our accomplishments. But I’m about to boast big time!”

I am SO DANG PROUD of MYSELF!!!! I think sometimes we are afraid to say that about ourselves. I’m not really sure why. I think it’s more of a woman thing. For all our lives we are taught not to be boastful about our accomplishments. But I’m about to boast big time! Ha! I’ve been working out harder than I ever have in my entire life and I’m REALLY proud of that. Granted this photo is taken from a very flattering angle. I took it not planning on posting it. I wanted to send it to a friend to show her my swimsuit. Cause I looove it (I’ll link it in my stories) ☀️ Anyway, I’m proud because I’m starting to see and feel my body build strength. But as I get stronger and my abs get stronger, the more apparent and obvious my loose skin becomes when sitting. And ya know what – I LOVE IT! It makes me so proud to see all my hard work from exercising and still see the beautiful proof that I carried two precious babies 💕 Part of me hopes that loose skin never goes away 💕 Moral of the story be PROUD of your body and it’s so called flaws and be PROUD of your physical accomplishments too. THEY’re both awesome. #loveyourself #selflove #strength #mombodlove #mombod

Ali Fedotowsky brings the phone down in front of her and shows fans her loose skin on her stomach. According to the Inquisitr she told fans she was proud of her skin. Ali said working out had started strengthening her stomach muscles and the skin was loosening a bit. She said the skin reminds her of her pregnancies and the hard work she’d put in.

She wanted to encourage her fans to embrace their body. It was also calling attention to the fact that influencers can change the way they look with angles and filters. Women don’t need to compare themselves to those on social media and just need to embrace their bodies. Her fans agreed with her message of self love and sent her a lot of support.

Ali’s Fans Send Her Thanks And Encouragement

Ali Fedotowsky had lots of positive response to her post. One of her followers said, “I struggle with self-image and it’s so refreshing to see a fellow mama being honest and open and rightfully proud!” Another said, “I LOVE this…seeing the hard work pay off while still honouring the amazing work our bodies do to make little humans.”

If you want to relive Ali’s time on The Bachelorette, or see it for the first time, you might get your chance with The Bachelor: The Greatest Seasons Ever! A show for Bachelor Nation missing new content. One of the recaps that has yet to be announced could feature a recap of Ali’s season. According to Pop Sugar only a recap of Sean Lowe’s season aired. The next two coming up are Kaitlyn Bristowe and Ben Higgins.

‘My 600 Lb Life’ Milla Clark: Where Is She Now And How Is She Doing?
Kendall Jenner Flaunts Plump Booty In Barely-There Bikini Bottoms
‘The Young And The Restless’ Spoilers, June 11-14: Summer Needs To Watch Her Back
Is David Eason Deliberately Fishing For Trolls With New Dog Post?
Is Jessa Duggar Finally Going To Reveal Baby No. 4’s Gender?