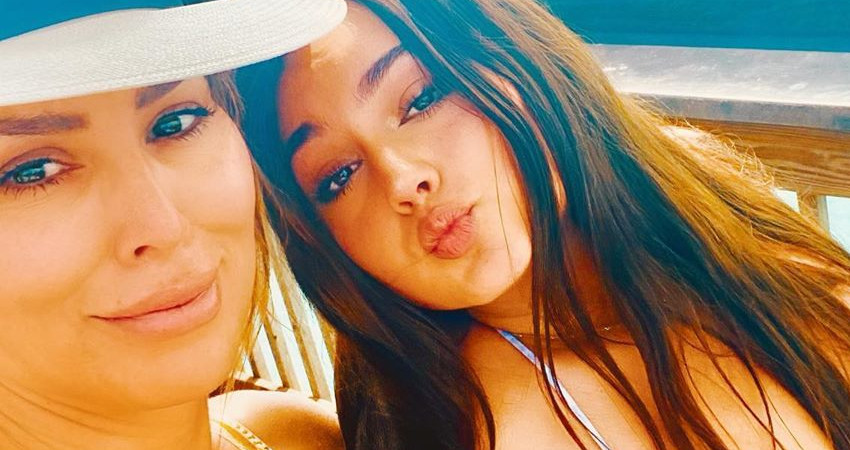 The Real Housewives of Orange County star Kelly Dodd may be in Florida, but she’s getting a lot of shade from fans. The reality star is in the sunshine state with fiancé Rick Leventhal to celebrate her daughter’s 14th birthday.

However, the comments on a photo of just Kelly and Rick turned into a free-for-all. While many fans simply wished Jolie a happy birthday, others took the opportunity to bash Rick. And Kelly wasn’t having it.

RHOC Claps Back at Fans For Insulting Fiancé: ‘Get a Life’

Earlier this week, Kelly, Rick and Jolie went to the Versace Mansion in Miami Beach, FL. They were there to celebrate Jolie turning 14-years-old. Kelly posted two photos of the celebration on her Instagram.

One photo features Jolie and a friend in front of an ornate water fountain. The next photo is just Kelly and Rick enjoying a night out.

Several fans took to the comments to bash her relationship with the conservative network correspondent.

As fans know, Rick and Kelly are engaged. He’s reportedly selling his penthouse in New York City and moving to California. However, the couple traveled to Florida for some sun and fun with Kelly’s daughter, Jolie.

One fan attacked Kelly for being “right winged.” However, Kelly set the record straight and let the fan know she’s actually a Libertarian. Kelly further explained that she’s a “social liberal and a complete moderate.”

Another fan asked Kelly why she posted a photo with her fiancé. Kelly took the comment as an insult and told the fan off. The Blast reports that Kelly told the follower to “get a life.”

Yet another follower wrote that while they “like” Rick, there’s something “weird” about the Fox News employee. The fan continues questioning Rick’s confidence and ability to stand up to Kelly.

The RHOC star was cordial in her reply, but she seems to hint that fans will get to know Rick through the Bravo show. She writes back that Rick is the best. “You’ll see.”

No, Kelly Wasn’t Fired From RHOC, She Reiterates

Even before several Vanderpump Rules stars were let go by Bravo, rumors circulated that the network was firing Kelly. In fact, before Stassi, Kristen, Max and Brett were given the boot, Kelly told fans she wasn’t fired.

However, there is a renewed quest from fans for Kelly to get her walking papers from Bravo. Along with Kelly, Bravo fans also want to see VPR’s Jax Taylor, and possibly Brittany Cartwright, go next.

The RHOC star has made several problematic comments in just the last few months alone. Some of her comments include saying that coronavirus is “God’s way of thinning the herd.”

While she apologized for those comments, an apology didn’t stop Stassi Schroeder’s firing.

When a fan asked again about the rumors, Kelly slammed the rumors as “lies.”

Kelly also recently let a fan know that The Real Housewives of Orange County will resume filming next month. Check back with us for updates on when it will hit the Bravo airwaves.