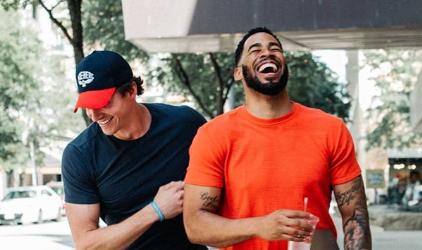 Lots of fans really wanted Mike Johnson to be the first Black Bachelor. That didn’t happen. He’s thrilled for Matt James, now that he got the job. He thinks Matt will do a great job.

There were so many fans that wanted Mike for the lead over Peter Weber. Rachel Lindsay, the franchises’ first Black Bachelorette, said Mike, “checked every box.” She even recently said if things didn’t change she would have to leave Bachelor nation due to their lack of diversity.

Mike Johnson is happy the folks at Bachelor headquarters are finally listening to their fans about being inclusive. He posted a video on Instagram saying, “what’s up beautiful people, it’s me Mike. I just want to give a huge shout out to Matt James as the new Bachelor. Congratulations bruh. I texted him earlier and show him love and shout him out publicly as well.”

Mike doesn’t want people to feel bad for him. There’s a lot on the horizon, according to Mike, and he’s elated with the choice. The producers announced Matt James would be the lead today. It was a surprise and a thrill for fans of Bachelor nation.

Who Is Matt James, The New Bachelor?

Mike Johnson knows Matt James through Tyler Cameron. James is known to Bachelor nation as Tyler’s best friend and part of the Quarantine Crew. Orginally the plan was for him to be one of Clare Crawley’s suitors on The Bachelorette. The coronavirus had other plans.

“He would have been on Clare’s season if it started in March. When we realized the shutdown was going to extend through the summer, we started thinking about how we were going to choose our Bachelor,” production said. Rob Mills went on to say he was on their radar. They had to decide if they would try him with Clare or announce him.

The Bachelor team released a statement about their plans. They said, “we are excited to move forward with both Matt James as the new Bachelor and Clare Crawley as our next Bachelorette. We acknowledge our responsibility for the lack of representation of people of color on our franchise and pledge to make significant changes to address this issue moving forward,.” The statement said they will do better and expand the diversity of their cast. Fans are ready to get back to normal and show the new leads some love!