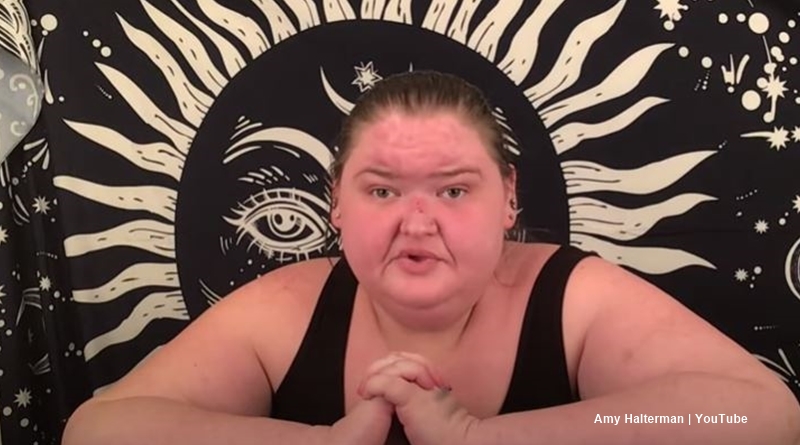 1000-Lb Sisters Tammy Slaton and Amy Slaton-Halterman featured on their own show with TLC. Fans call for a renewal of the show since Amy started updating them on her YouTube and Instagram recently. Amy did way better than her sister Tammy with her weight loss and qualified for gastric surgery at the end of the show. From her videos, photos, and a February update from TLC, fans see she still loses the pounds. Fans adore her because she seems really determined.

This week, Amy shared a photo of her on Instagram. With her short haircut, it’s clear that much of the weight she lost shows her profile clearly.  Fans loved the new look and noted that if she wants long hair for a special occasion, a wig could always suffice. The hair update started off calls for more of the TLC show. But, fans think it’s over after Tammy said no second season’s in the pipeline. Recall that Amy and her sister already got some notoriety with their YouTube which rocketed up subscribers with the Bunny Challenge.

So, devoted fans hop over there to keep up with them. Notably, since the season ended, Tammy went very quiet. But, Amy keeps the content coming sporadically. Despite obviously losing weight, the 1000-Lb Sisters star seldom posts full-length photos of herself. So, when TLC popped up a short special showing her weightloss in February, plenty of fans commented about her achievement. They love the happy ending for Amy who married and hopes for a baby.

Way smaller Amy inspired her fans for her determination

The Blast described Amy’s weightloss as “amazing!” Actually, her fans really can’t get over how well she does. One fan wrote on YouTube, “I’m glad Amy is actually trying. I can see the light and happiness in her eyes. I can see the difference and I hope she can reach her goal.”  Another one wrote, “Amy’s changing both physically and personality wise. She’s so much more sincere and sensitive in her own right. Congratulations, Amy. Applause.”

Meanwhile, in her own recent video where Amy spoke about her poor rubbed nose, people also commented favorably about her attitude. She explained that she wears a mask to help with her breathing but as she lost weight, it no longer fits her. So, she tightened it up. It gave her nasty blisters. So, the 1000-Lb Sisters star plans on getting a new mask. But, it takes six months to a year to get them in her town. Amy’s fans gave her some advice about using bandaids, but she can’t use them, as she’s allergic to the glue in them.

Amy and her husband take care during the coronavirus

Amy assured her fans that she and her husband Michael take a lot of care with social distancing. In fact, they only ever leave the house if they really need to. Fans know that Amy already struggles with her chest, so the last thing they need in coronavirus.  One impressed follower wrote, “You look like a different person! So impressed by your determination to lose the weight. 😊 well done Amy.” Another one noted, ” Wow! How good do you look? You’ve lost SO MUCH WEIGHT! Well done girl, well done x.”

Meanwhile, fans who hope for a second season asked for an update on her weight as she inspires so many other people. The fact that she never yet provided a full update makes some fans hope for something as a follow up for her from TLC. The network might not bring the second season of 1000-Lb sisters, but Amy’s in big demand from fans. Fans don’t know if Tammy every got her gastric surgery, and if she didn’t, then maybe that’s why she didn’t seem keen on another season at all.

In the meantime, fans love the way Amy seems so determined to keep at her self-improvement. Fans wander in to see her on Instagram and YouTube. It seems she’s never far from the thoughts of 1000-Lb Sisters fans.