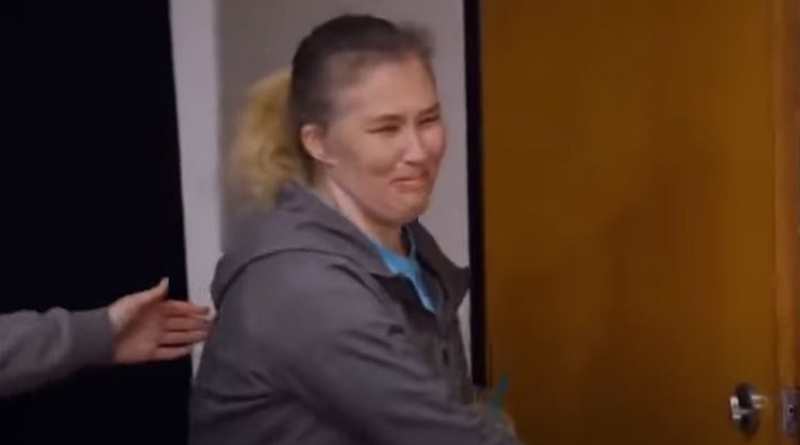 Mama June From Not to Hot fans waited for ages to see June make an appearance on the WEtv show. Unhappy with that, some fans felt disappointed with the whole thing. Notably, when they did see her, they didn’t like that June fumbled her drugs pee-test. Rumors of pregnancy arose, but in real life, she looks rather non-pregnant. The teaser for June 12 revealed an emotional reunion of June and Pumpkin. Pumpkin thinks her mom’s a “hot mess.”

The storyline for WEtv’s Family Crisis: Face Off With Mama summarises what fans see. “Mama and Pumpkin face off in a dramatic and scary sit down, but neither are prepared for the results of Mama’s drug test. Alana discovers a secret the family has been hiding from her.” The Daily Mail UK noted that June says she looks like “a hot mess” and Pumpkin totally agrees. The difference is shown when Pumpkin tells the camera during her congressional that June actually “Looks like hell.”

Pumpkin meets Mama June in a production office. Perhaps the neutral ground made it easier for a bit of scripting. Actually, on social media, many fans of the show think much of the season came with “bad acting.” Anyway, irrespective, fans waited impatiently for her first appearance.

One Mama June From Not to Hot fan noted their anger about that on Twitter. They wrote, “This season Should have been about June’s recovery and her family’s life in her absence! Instead we got Jennifer V Pumpkin!! We had to wait 8 Weeks to see June?? Seriously!!” But now, fans can expect June to feel sorry for herself after she tells Pumpkin that she “missed them all.”

Mommy feels sorry for herself, thinks nobody missed her

When June first meets with Pumpkin, she says, “I missed all of you. And no one f*****g missed me.” Well, that goes against the rest of the storyline this season. Alana (Honey Boo Boo), cries a lot. June’s sister Doe Doe tried to find her and get her back with the family. But, fans suspect she’s actually so high on drugs that her addiction means skewed perceptions.

.@jogarner1964 is left stunned after seeing June for the first time in months! #MamaJune #FamilyCrisis pic.twitter.com/Fs5MHZmYzk

In the teaser, Pumpkin hugs her mom, but she’s really shocked at her appearance. The Mama June From Not To Hot star made out to her daughter she felt in such a rush to see her, she just tossed on any old clothes. Really? Fans think it pretty weird that she couldn’t wait to see Pumpkin. After all, months went by when she never made an effort. Nevertheless, it happened now. But, Pumpkin wisely kept Alana out of it.

Pumpkin keeps her meetup with June a secret from Alana

In her confessional, Pumpkin talks about her little sister and June. She notes, “To see her like that is very heartbreaking for me. Then she adds, “It also made me realize that I made the right decision for Alana to not come today and not telling her.” Fans need to tune in on Friday to watch how Alana reacts. Could that meeting between June and Pumpkin be the secret the family hid from her?

Sound off your thoughts about the meet-up between Pumpkin and Mama June, in the comments below.