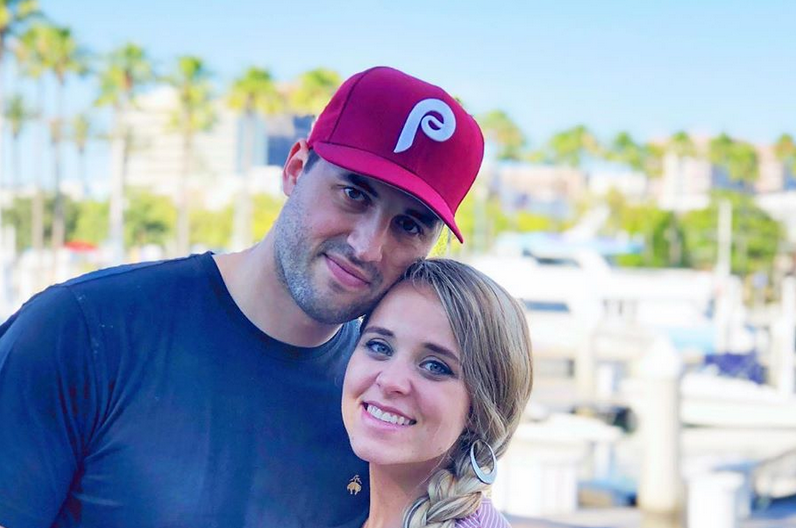 Recently, Duggar fans have had a lot to say about Jeremy Vuolo. Jeremy is Jinger Vuolo’s husband, and he’s also the dad of one-year-old Felicity. While some Counting On fans seem to like Jeremy, others have serious issues with him. Why don’t some of the family’s fans like Jeremy?

Duggar fans accuse Jeremy of using Felicity as a “prop”

On some of Jeremy and Jinger Vuolo’s Instagram posts, their followers comment and say that the couple uses Felicity as a prop. On Jeremy’s most recent post, one of his followers writes, “Another staged photo with your props?” It sounds like this fan is referring to both Jinger and Felicity as Jeremy’s “props.” Essentially, when users refer to Felicity as a “prop,” they mean that he’s using Felicity in his photos.

On social media, both Jinger and Jeremy share plenty of pictures featuring Felicity. In other comments sections, fans and critics alike refer to her as their “prop.” They feel that the Duggar couple uses their daughter to make their pictures cuter or to get more attention from fans.

Joy is a common and important theme throughout the Scriptures: In the Old Testament we read King David in Psalm 4:6: “You have put more joy in my heart than they [the wicked] have when their grain and wine abound.” The famous words of Psalm 16:11 speak of God’s presence as a place where “there is fullness of joy; at your right hand are pleasures forevermore.” Nehemiah told the people of Israel in Nehemiah 8:10: “do not be grieved, for the joy of the Lord is your strength.” In the New Testament, we discover this theme of joy is not only important, it is one of the goals of redemption through Jesus Christ! Listen to Jesus speak to His disciples about joy: John 15:10-11 10 If you keep my commandments, you will abide in my love, just as I have kept my Father's commandments and abide in his love. 11 These things I have spoken to you, that my joy may be in you, and that your joy may be full. The reason that joy is such a common theme in the Bible is because it is an essential reality of what it means to be a Christian! Jesus did not redeem a people for them to be somber, morose, and joyless. He desires our “joy to be full!” Jesus  came to give us joy…true joy: joy that is not contingent on our circumstances, but joy that is found in who God is and what he does.b

On that same recent post, fans are saying that Jeremy comes across as being self-centered. One follower commented, “Every photo you post is only to make yourself look good. Can’t even see Jinger’s face anymore. 🙄” To that, someone responded, “Yep. Always has to be the focus.” And, yet another follower said, “so agree. Full of himself.”

There are other followers who are sharing similar thoughts on the new post. Jeremy hasn’t responded to these claims, and it doesn’t seem likely that he will. Usually, he and Jinger avoid responding to the negative comments they receive.

One of the more recent claims that’s come out is that Jeremy is controlling. After fans watched a Q&A session from Jeremy and Jinger, they started to say that Jeremy controls his wife. Duggar fans saw that he disputed her answers. He appeared to be argumentative over simple questions and the way Jinger chose to respond.

One Duggar fan wrote, “why couldn’t you accept your wife’s different opinion? This was painful to watch.” Other similar comments followed that one. Jeremy and Jinger never responded to those claims though. The video has since been deleted.

Fans are also concerned that Jeremy might be pushing Jinger out of her comfort zone. The couple made a move to Los Angeles, California. Since the move, the couple has changed their lifestyle a bit. With that, Jinger has dyed her hair blonde. She’s also started dressing less modestly (at least by the Duggar family’s standards). Though some fans think that Jeremy is influencing Jinger, others are just glad that Jinger is figuring things out for herself and branching out. It’s very possible that she made these decisions herself.

In a series of Instagram stories, Jeremy is playing soccer with his daughter. While some fans gushed over the cute video clips, some argue that the clips aren’t genuine. They seem to think that Jeremy is “fake,” and they say that he only plays with Felicity when someone is recording it. Not only do they think Jeremy playing soccer with Felicity looked unnatural, but they also think he’s too critical of her, especially since she’s only one year old.

Today we are experiencing an Easter Sunday like never before. No sunrise service, no gathering to sing of Christ’s resurrection with the redeemed, no special lunch with family and friends. And yet, the joy in our hearts remains unshaken, the hope of our souls imperishable. . Jesus Christ is alive. He was no mere teacher, no mere man who established a tradition of religion. He is the reigning King of the universe to whom all praise and glory and majesty is due. And it is who he is and what he has done that we celebrate today. Happy Easter! He is risen, indeed.

In the past, fans have also commented on how Jeremy and Jinger’s Instagram posts look staged. It seems like they had a photographer take family photos for them to post regularly on social media. This way, they don’t have to take new photos each day to share.

The Duggar family returns to TLC on July 7, 2020, with the Season 11 premiere of Counting On. Note that the premiere has been moved from June 30 to July 7.