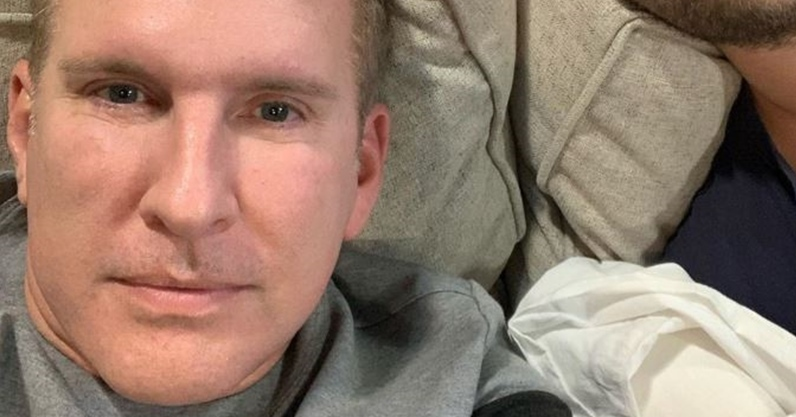 Chrisley Knows Best fans who find Todd attract are going to want to proceed with caution. Things got a little hot and steamy on his Instagram profile a few hours ago. Todd Chrisley shared a short video clip of himself putting on a sexy show. The Chrisley Knows Best star threw his arms up in the air. And, then he twisted his hips back and forth like he just didn’t care.

The only way this video clip could have been anymore of a thirst strap is if Todd had been wearing gray sweatpants. As those who use the TikTok know, it is a trend for attractive males to do a similar dance while rocking gray sweatpants to put the curves of their nether regions on display. Fortunately, Todd kept things somewhat classy in that department.

While this was definitely a teaser for his fans… This video was not intended to be a fan show. Todd was, once again, firing back at the haters on his profile. As we previously reported, Todd went at it with a troll in the comments of a picture he shared on Wednesday evening. The picture featured himself and Chloe. He was announcing a new episode of the podcast he was doing. Unfortunately, one of his followers felt the need to attack Chloe’s race. But, Todd was quick to put them in their place.

Todd, however, apparently wasn’t done. The short video of Todd putting on a sexy dance was basically his way of sticking it to the trolls. “Bye Karen,” he hashtagged the video.

How does his children feel about his sexy show?

Noticeably, what made Todd Chrisley’s sexy video that much more entertaining was Chase being in the clip. He was sitting on a couch off to the side as his father danced. The video panned over to Chase who had wide eyes and a horrified look on his face. He was clearly not happy to see his father getting his groove on.

His daughter, Savannah Chrisley, shared the video clip on her own profile. She seemed to be just as horrified as her brother Chase. “Uhmmm….I’m not sure if he’s my real dad,” she penned.

While his children were not feeling his sexy moves, his followers certainly were. This was not the type of show some of his fans want to see. However, most were happy to see him getting his groove on. A few even noted they wanted to see a dance off between him and Nanny Faye.

So, did you enjoy Todd Chrisley’s sexy dance? Be honest, how many times did you watch it?