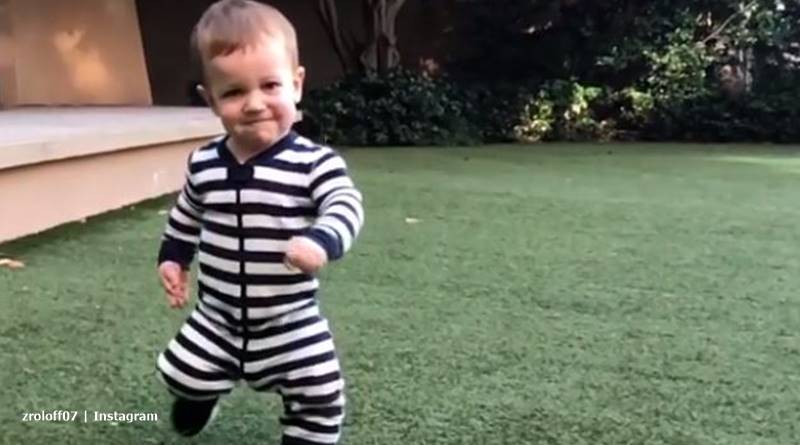 LPBW fan-favorite, Jackson Roloff told his mom all he wanted for his birthday was “Mama, dada, baby Lilah Ray, and dog dog [Murphy],'” we noted. Well, Tori and Zach gave him something special anyway. Little People, Big World mom, Tori loves photography, and she gave him a starter camera for kids. His photos show life from the perspective of a tiny little person.

Fans know that Jackson starred on TLC’s Little People, Big World since before his birth. The Hollywood Gossip reminded fans that he turned three-years-old about a month ago. Both of his parents took to Instagram and shared how much they love their son. Fans know that Tori Roloff tried really hard with her photography. These days, she turns out some stunning photos. Actually, on Instagram, she apologized for sharing so many pictures of her kids Layla and Jackson.

Fans love the photos of the two LPBW kids and begged her to keep them coming. In some of them. Jackson hams it up or the camera. And, he mastered the art of cheesy smiles. He seems quite fascinated with his mom’s obsession. And so, it seems a camera for his birthday hit the spot for him. While his photos won’t win any awards just yet, the ones his mom shared in her Stories bring an interesting perspective.

Looking at the photos Tori shared, it seems that Jackson focuses directly on what matters most to him. The little boy’s not reached the stage where he gets the idea of thirds or the big picture. Mind you, even adults struggle with that. One photo showed he focused on his toes. Another focused on something Tori held. That made her headless. Actually, quite a few of them show headless people. One interesting pic revealed only Tori’s legs. Maybe he likes the idea of someone with long legs, given so many people in his life have short legs.

Naturally, he took plenty of photos of himself from various angles. But photos of his Grandpa Matt and Tori sitting in the living room reveal just how small the LPBW star is. The rooms and the people in them tower over him. For Jackson, life must be a bit like living in a sea of skyscrapers. Those pictures look like an average-sized person lay down on the ground to create that perspective. Actually, some of his photos and one showing his little sister seem particularly good.

You can watch the video of Jackson Roloff’s photos below.

What do you think of the life seen through the lens of a very small little person? Sound off in the comments.

More Kids For Arie Luyendyk Jr. & Lauren Burnham? He Reveals Plans
‘Below Deck Med’: Captain Sandy Didn’t Know The Whole Story About Lexi
‘Love After Lockup’: Are Kristianna & John Expecting A Baby?
Kanye West Wasn’t As Committed To Kim Kardashian As She Is To Him
‘MAFS’ Virginia Coombs Spotted With Ring On THAT Finger Post Split