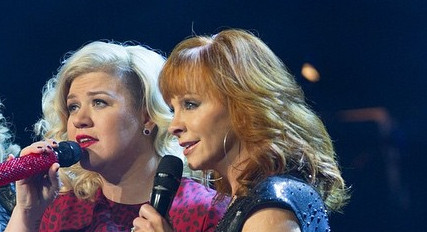 Speaking of famous, Kelly’s mother-in-law is none other than country singer Reba McEntire. And they knew each other BEFORE Kelly began dating Reba’s stepson.

Kelly and Reba first met back in 2002 when they sang a duet during the American Idol Season 1 finale. The “A Moment Like This” singer went on to win over runner-up Justin Guarini. Not only did Kelly’s win kick-off a career that’s still going, but she also gained a friend in Reba.

In 2007, the pair performed a duet of Reba’s iconic song “Does He Love You” on CMT Crossroads. The chemistry between the friends was so strong, they went on tour, 2 Worlds 2 Voices, the next year. Watch their phenomenal “Does He Love You” performance below.

In 2018, Kelly gave a speech in Reba’s honor at the Kennedy Center Honors.

The “Since U Been Gone” Singer Later Married Reba’s Stepson

In 2006, Kelly met music producer Brandon Blackstock backstage at the American Country Music Awards. The producer has a family connection to Reba – she is his stepmother by marriage.

Keeping it all in the family! Kelly’s manager is Narvel Blackstock, Brandon’s father and Reba’s then-husband. Reba and Kelly’s eventual father-in-law split up in 2015.

Us Weekly reports that Kelly encouraged her in-laws to stay together, to no avail. Yes, by that time, Kelly and Brandon were married. They wed in 2013.

Brandon has two children from a previous relationship.

In addition to being a judge on NBC’s The Voice, Kelly also has her own daytime talk show. The Kelly Clarkson Show premiered in 2019. With production shut down due to the coronavirus, Kelly films remotely, often without make-up, which fans love.

American Idol Winner Files For Divorce After 7 Years of Marriage

As busy as Kelly is, it’s not a huge surprise that her marriage fell apart. The Stronger singer filed for divorce last week, though media outlets just broke the news on June 11, 2020.

The divorce filings list “irreconcilable differences” as the cause of the divorce.

Kelly is seeking joint physical and legal custody of her two biological children, The Blast reports.

Season 18 of The Voice wrapped up last month. NBC has yet to announce when another season of the singing competition will air.

Fans can catch Kelly on The Kelly Clarkson Show weekdays. The time and channel depends on your location.

Ali Fedotowsky Relieved To Get Answers To Mystery Illness
‘LPBW’ Will Zach & Tori Move To Roloff Farms For Jackson And Lilah?
‘Luca’ Post-Credits Scene Explained: What The Heck Happened?!
‘Bachelorette’ Preview: Katie Warns Clout-Chasers To Get The Eff Out
‘Riverdale’ Season 6 Premiere Date Set for November 2021