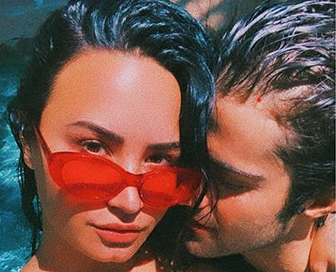 Former The Young and the Restless star Max Ehrich has been going out with Demi Lovato for a few months now. And, the couple is ready for more. Us Weekly released exclusive news that Max has even decided on a ring for Demi. The Y&R alumnus plans to propose once the shelter-in-place orders are fully lifted.

Y&R fans first suspected that Max was dating Demi when they saw the two flirting on Instagram. Since then, Max and Demi have made appearances on each other’s social media pages. Max even admitted that he’s been crushing on Demi for almost 10 years.

Since they’ve started talking, Demi has been open with Max about her history with alcohol. Demi has been working on her sobriety for years now. Us Weekly tells fans that the Y&R star is helping her in this journey. Max supports Demi and says that she’s doing well. Demi is focusing on her health during the quarantine.

At first, Demi’s fans weren’t supportive of this relationship. They worried that Demi would get hurt again. However, it seems that fans are now much more enthusiastic about Demi’s new boyfriend. On June 8, Max posted a picture of roses on Instagram, with the caption, “love is sweet.” Several users commented that they’re happy for Max and Demi. One fan even said she hopes they get married.

According to Us Weekly, Max wants to pop the big question as soon as the coronavirus dies down. Demi’s family has met Max. And, they approve of him. Max’s family also likes Demi. And, both families are looking forward to the couple taking the next steps in their relationship. The former Y&R star also has Demi’s permission. The couple talks about their relationship frequently and made this decision together. Now, it’s up to Max to make his move.

The Young and the Restless alum Max has been staying with Demi during the quarantine. At Demi’s house in California, the two have been spending time cooking, watching movies, and making music together. Thanks to the shelter-in-place orders, Max and Demi have had the chance to grow in their relationship together.

While neither Max nor Demi have announced their plans publicly… The two post about each other on social media a lot. In early June, Demi posted a series of selfies with the Y&R alum on Instagram. She captioned the post, “ilysfmiai,” which means, “I love you so f***ing much it’s actually insane.”

A few days later, Max tweeted, “I’m in love with the most beautiful girl in the world. I’m the luckiest guy in the world.” Even though they haven’t confirmed proposal plans, it’s clear that Max and Demi are deeply in love.

Do you think Max will propose to Demi soon? Let us know in the comments.