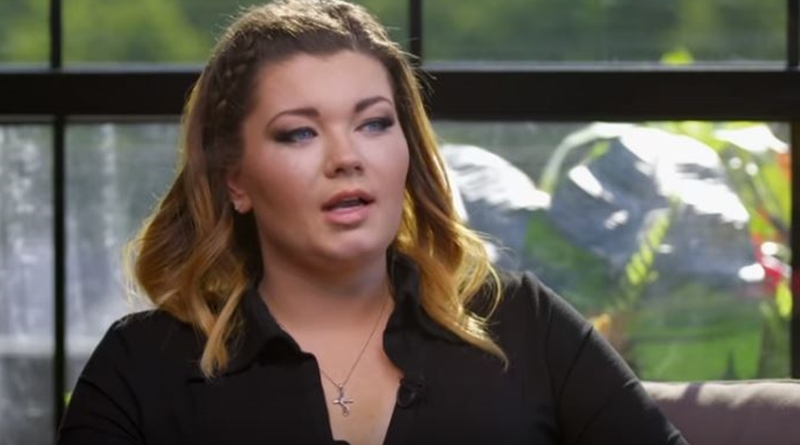 Amber Portwood met her new boyfriend online and Dimitri features on MTV’s Teen Mom OG. According to her, Dimitri’s simply wonderful. But fans think he makes the wrong move with her, given her past. On Tuesday, he shared a slide on Instagram and told fans off for trying to change his mind about her.

Amber Portwood and Dimitri apparently love each other deeply

On the show, fans saw that Amber got Dimitri to meet her brother. It came after Dimitri took a lie-detector test. She’s now convinced that he’s the right guy for her. But, her brother Shawn’s not so sure. In fact, he spoke to him about wanting a K-1 Visa and Dimitri said he just wants a work permit. Dimitri feels that first he should build a relationship with Amber and get a job. We noted that Amber got plenty of criticism for starting a new relationship.

The Hollywood Gossip noted that Dimitri Garcia got slammed by fans. On a now-deleted post, some fans alleged that Dimitri only wanted Amber for “money, fame, or US citizenship.” The outlet noted that he clapped back sharing, “I am not impressed by money, followers, degrees or titles.” Well, he’s in Belgium and perhaps Amber Portwood should star on TLC’s 90 Day Fiance instead of Teen Mom, fans think. But, it seems that they slide into Amber’s DMs and his, as he again addressed the matter of his motivations. He says they both love each other.

Dimitri wants people, to stop trying to change his mind

On his Instagram post on Tuesday, May 9, Dimitri said on a slide that he’s “not there for the money.” He also added other things he’s not there for, like “glory” or “notoriety.” He said that he’s there for one reason only – Amber.

Then he told fans to stop trying to “change” what he “thinks of her.” The Teen Mom newcomer wants people to let the “past” go as it “remains in the past.” Then he felt that if people surround themselves with “good people,” then that makes someone “become a good person.” Presumably, he sees himself as the “good person.”

In his final sentences, Dimitri noted, “I love it and she loves me.” Well, fans can’t comment on his post as going back to the beginning of the season and beyond, he disabled comments. Amber Portwood’s not very active at all on Instagram. But, fans talk about Dimitri and Amber Portwood on Twitter a lot. While Dimitri claims people try and change his mind, most of the talk over there focuses on Amber. It seems they try and change her mind about Dimitri, rather than the other way around. 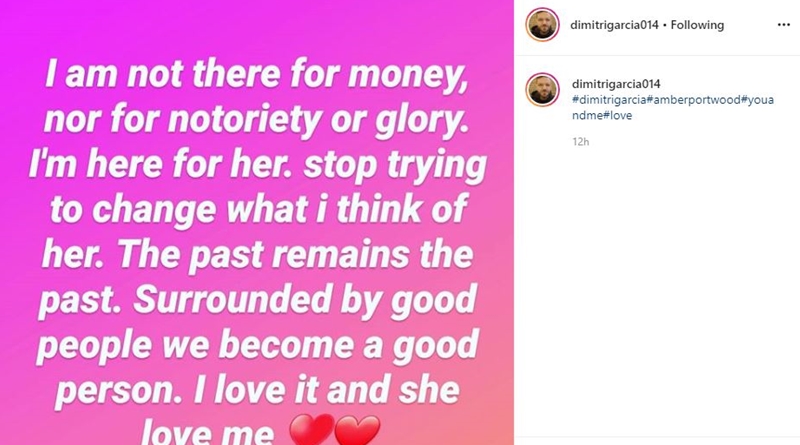 On Twitter, one MTV fan said of Amber, “The absolute last thing Amber needs right now is a man!” Another person wrote, “Here’s a thought: maybe if Amber can be single for more than 2 weeks she can heal properly with therapy.” Others think Dimitri’s a faked relationship anyway. One critic noted, “Anyone else feel like Amber just forces random relationships so she has content they can film, cause think about what else would she film.”

Dimitri said fans should stop trying to change his mind about Amber Portwood but it certainly seems fans couldn’t care less on Twitter. They just hope Amber gets her life together and gets off the show. What do you think? Sound off in the comments below.

Katie Thurston Proves She’s NOT The Master Of Disguise
‘Young And The Restless’ Hunter King Breaks Silence On Social Media
Is ‘The Bachelor’ Scripted, Former Cast Members Weigh In?
Kyle Richards Calls Out Lisa Vanderpump: ‘Give It A Rest’
Clare Crawley Underwent Breast Implant Removal Surgery, How Is She?