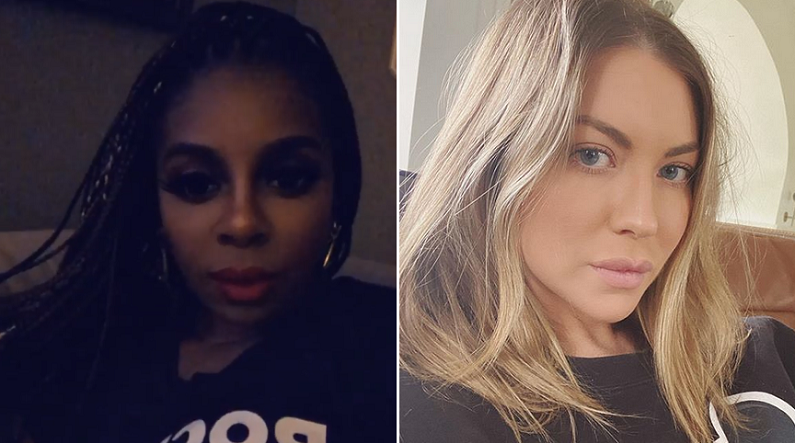 Candiace Dillard had some choice words for Stassi Schroeder. The Real Housewives of Potomac star didn’t hold back on her feelings for the former Vanderpump Rules star. She called out the television personality for her past racist remarks.

Stassi Schroeder and Kristen Doute received backlash for their racist past. Both ladies apologized on their respective Instagram pages on Sunday, June 7. But that doesn’t mean the backlash is dying off anytime soon. Candiace Dillard took to Twitter to sound off on the reality star. Additionally, she called her a “fool with a microphone.”

The Real Housewives of Potomac star Candiace Dillard took to Twitter to call out Stassi Schroeder for her racist comments. Her March 2, 2017 episode of her “Straight Up With Stassi” podcast went viral over the weekend, per All About the Truth. On the episode, Stassi revealed she was against the Black Lives Matter movement. She didn’t understand it at all.

“You can turn it off or unfollow me,” Stassi said. “Whatever, whatever, but like everyone giving their impassioned speeches about race and all that stuff, I’m like why is it always just about African Americans?”

Stassi didn’t understand why there isn’t more representation for other cultures. The Next Level Basic author also claimed that the Oscars wasn’t “about race,” but about “your acting abilities.” Candiace didn’t like what Stassi had to say in 2017. She called out the VPR star and threw shade in regards to her podcast.

A follower informed Candiace that Stassi issued an apologize on Instagram. But the RHOP star wanted more proof. Several days later, she followed up with the tweet, “Unchecked racism is still racism. Just because it was said several years ago doesn’t make it less racist, discriminatory, or careless.”

Candiace also said it doesn’t matter if the racist comments were made recently or several years ago. She still finds it a “huge PROBLEM.” However, it’s unclear whether those tweets were directed at Stassi. But some followers think she’s still firing back at her.

Neither Stassi nor Kristen apologized to Faith Stowers directly

Per Us Weekly, both Stassi Schroeder and Kristen Doute haven’t personally reached out to Faith Stowers. They only issued separate apologies on their Instagram pages. This comes after Faith revealed that they called the cops on her in 2018. Both VPR stars have yet to privately apologize to Faith. In the comments section on Instagram, fans questions whether they reached out to Faith.

The former cast member confirmed to a follower that she didn’t speak to them. An inside source also made a confirmation to the outlet.

“Kristen and Stassi didn’t reach out to Faith directly,” the inside source said. “But Jackie Schimmel, host of the ‘B***h Bible’ podcast where Stassi first told the story, apologized privately.”

Candiace Dillard isn’t the only Real Housewife to call Stassi out. This comes after The Real Housewives of Atlanta star Porsha Williams reacted to Stassi Schroeder’s “Nazi Chic” photo from the past, per People. She simply retweeted the controversial photo with the caption: “WTF.”

What are your thoughts on what Candiace Dillard said about Stassi Schroeder? Sound off below in the comments section.