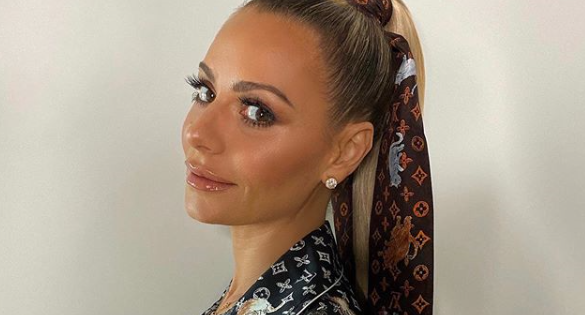 With the state of the world the way it is at the moment, lots of stars are using their platforms to speak out. With the cancel culture of 2020, those who don’t are catching heat. Several users on Instagram weren’t happy with Dorit Kemsley’s posts on Instagram. They accused her of “flaunting her white privilege at an inappropriate time.”

The Real Housewives of Beverly Hills star posted a picture of herself wearing Chanel everywhere. This isn’t new for her. She often posts pictures of her outfits for her followers. One user said, “kind of inappropriate to post this these days.” Another said, “if you don’t have anything to contribute to the cause than maybe just don’t post anything.”

Her fans went to bat for her. One posted, “Not EVERYTHING people post right now has and must be related,” the person stated. “People need to be able to live their lives too. People can still fight for the cause and be supportive and post other things about their lives.”

The innocence of children is one of the most beautiful things about them. They want to be loved, to learn, and to feel safe. It is in our hands to create a better society for them than the one we grew up in. #BLM #BlackLivesAreImportant. 🙏🏽

Dorit Kemsley posted herself in the same outfit but with her two kids. She showed a playful behind the scenes look at the shoot in black and white. According to The Blast, this was her response to the criticism.

She said, “the innocence of children is one of the most beautiful things about them. It is in our hands to create a better society for them than the one we grew up in.” She tagged BLM and Black Lives Are Important. Immediately her fans praised her for the thoughtful post. One tells her she was their favorite on RHOBH.

Dorit Kemsley isn’t the only housewife getting hate on social media. Erika Jayne posted a sultry picture of herself promoting a new episode of the show. She posted a sexy snap of herself to Instagram showing lots of cleavage and received a lot of the same messages Dorit did.

When Jayne posted a black square in solidarity with many others on Instagram someone commented, “your son is an officer.” Erika had no problem putting them in their place. She said, “My son was brought up NOT to be racist. His job is to protect and serve ALL not just people that have his skin color.” She told that person to stay off her page.

One fan said, “thank You for being one of the only celebrities to support the Police. We are not all bad and most of us took this job to help people and make a difference.” Erika has not responded to the criticism from her sexy posts. Fans continue to look to the stars of Bravo to use their platforms to make a difference.