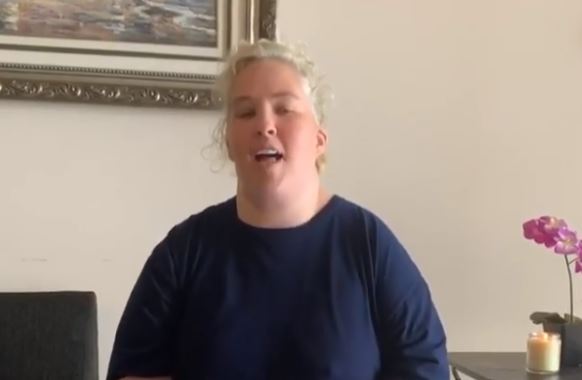 The fans of Mama June: From Not to Hot have been really wondering what is going on with her. Mama June has been enjoying her life without her kids. Now, fans think there is a chance she could be pregnant. At the end of the last episode, fans saw her being uncertain about taking a urine test to show if she is using drugs. Could this be because she is expecting? It should be revealed in this week’s new episode.

Mama June hints at a baby

Mama June did act like there is something that they will find on the urine test. The thing is she didn’t say what it would be at all. It doesn’t look like she will be getting out of taking it next week. Because of the past, June will be taking a test and all will be revealed.

I’ve been enjoying connecting with y’all! Click the link in the bio or visit my official website OfficialMamaJune.com and let’s connect!

In the past on the show, Mama June thought she could be pregnant. It turned out that wasn’t the case at all. She already has four daughters. Her daughter Anna Cardwell has two children and was recently spotted looking at pregnancy tests, but it was assumed they were for herself. Maybe she bought one for her mom?

Could June be pregnant?

You never know with June what is going on. There are so many reasons she might prefer not to take a pregnancy test. June has been doing drugs. Pumpkin made it very clear that she wouldn’t talk to her if she had been on something.

It would be pretty shocking if June was expecting. This was filmed a while ago. Pictures of her have been taken and they don’t show any kind of bump. It really would surprise fans if a baby was on the way. It will be interesting to see what happens in the new episode this week. Hopefully, they share what June is hiding and why she doesn’t want to take this urine test. It doesn’t look like Mama June is pregnant again in 2020.

Right now, Pumpkin is meeting with her mom to explain everything that has been going on. She wants her to realize that she is really affecting their lives with the way she is behaving.

Share your thoughts in the comments below. Don’t miss new episodes of Mama June: From Not to Hot on Fridays on WEtv. Because of the preview, fans can’t wait to see how this week’s episode goes down.

Surprisingly, These ‘Married At First Sight’ Couples Are Still Together
Starz ‘Men in Kilts: A Roadtrip with Sam and Graham’ A Valentine To Scotland With ‘Outlander’ Stars, Preview
‘BattleBots’ Exclusive: Will Relative Newbie Valkyrie Beat Rotator?
Josie Bates Gets Raw About How Pregnancy Feels After Miscarriage
‘Stranger Things’ Star Teases New Content–Prepare For A Scary Season