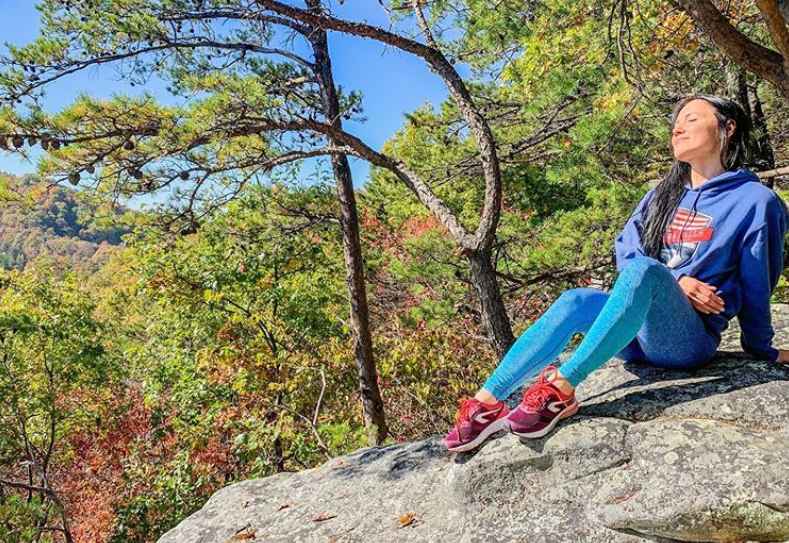 Varya and Geoffrey of 90 Day Fiancé: Before The 90 Days have been one of the highlights of the latest season of the TLC reality show. Malina is currently living at home in Russia, while Geoffrey is at his home in Knoxville, Tennessee.

Varya recently accepted Geoffrey’s second proposal before heading home. However, she also had fun on her two-week trip to America. This includes joking about being Putin’s spy and referring to a taxi driver as a redneck with moonshine.

90 Day Fiancé star Varya and her journey in a taxi

Many fans of the show have noted that Varya has a sense of humor. When not getting into battles with Geoffrey’s friend Mary, that is. After she surprises Geoffrey with a visit to Knoxville, Tennessee, he takes her on a tour.

As he reveals some of their surroundings, they have fun. This includes a terrifying ride on a roller coaster at Dollywood.

Varya takes to Instagram to write a lengthy post about her visit to America. She posts an image of herself enjoying nature and starts by writing “Time for stories.” She opens, saying, “How would I characterize Americans in one word?” Varya says before visiting America she would have simply said “a smile.” However, since her visit, she has more experience with Americans.

The 90 Day Fiancé star thinks the word is “political correctness.” Unlike Russia, America is, of course, a multinational country. She says she found it is very easy to “offend someone with an incorrectly spoken word.” Malina goes on to explain what she means by that.

At one time during her stay, she needs a car to get to an interview so she called a taxi. She describes the taxi driver as a local resident of a certain age. She describes it as when the ladies were entertained by stories of fishing and guns, more than compliments. Varya decides this is the perfect chance to find out more about real life in Tennessee.

Malina says she started a “nice conversation” with the taxi driver. However, the first problem comes when she can’t understand what he is saying. To her, it seems the driver “chewed his words before pronouncing them, and then swallowed the vowels.”

The TLC reality star says even if she put her ear to his mouth, she would only understand 20 percent of what he was saying. Malina soon discovers this is what is called the southern accent.

Knowing the best way to win someone over is with humor, Varya starts joking with the driver. The 90 Day Fiancé reality star says they laugh when she says she is “Putin’s spy.” The friendly taxi driver then asks Varya what she has found out about the locals. This is where things start going very wrong for the Russian beauty.

Answering his question, Varya says, smiling, “everyone here has moonshine and you are rednecks.” Feeling sure she has made a joke, she giggles. Meanwhile, Varya was shocked when she sees how the taxi driver’s attitude changes with her. She says “he frowned and did not utter a word.”

As noted by The Blast, from that moment on, the driver ignores everything Malina says to him. He turns the music louder and then starts talking to a friend on his phone. She described it as being like a “curtain” coming down.

Time for stories. How would I characterize Americans in one word? Before visiting America, I would say simply – a smile. Now, from the height of my experience, I think this word is political correctness. Perhaps this quality is trained over the years of living in a multinational country, where it is very easy to offend with an incorrectly spoken word. And now in more detail, as I came across this thought: Once I had to order a car to go to an interview. Driving the taxi was a local resident at an age when the ladies were entertained not with compliments, but with stories about fishing and guns. I decided this was my chance to find out more about real life in Tennessee and so I started a nice conversation with the taxi driver. The first thing that caught my eye: I do not understand what he was talking about. It seemed to me that he chewed the words before pronouncing them, and then swallowed the vowels. It was as though I put my ear to his mouth, but even so barely made out 20% of what was said. Then I found out that this is the southern accent. Anyway I know that the best way to win someone over is humor, so I started joking. We laughed at the words that I’m Putin’s spy. And my driver asked what have I found out about the locals. And I said with a smile on my face: everyone here has moonshine and you are rednecks. And giggled because I was sure that I said a joke. The taxi driver’s reaction surprised me though. He frowned and did not utter a word. And all that I tried to say afterwards, he ignored🤷‍♀️ turned on the music louder and then generally began talking on the phone with a friend on the speakerphone. A curtain! The reason for my stupid joke was Geoffrey. It was he who told me that they call themselves rednecks because of the neck tan and at the same time laughed and made it clear that this is a funny nickname. Only after the incident with a taxi driver I googled this word and realized how insulting it sounds. Conclusion: Americans can be very resentful of sharp, but honest statements. Maybe that is why they consider the Russians brutally honest.

It was Geoffrey who told Varya people in the area call themselves rednecks. He said this was because of their “neck tan,” and laughed, making it clear it was a “funny nickname.” After the incident with her taxi driver, Malina Googles the word “rednecks” and discovers just how insulting it actually is.

After all this, Varya has come to the conclusion that Americans can be “very resentful of sharp, but honest statements.” She feels this is maybe why Americans consider Russians to be brutally honest.

Catch up with all the stars of the latest season of 90 Day Fiancé: Before the 90 Days on the show’s Tell-All. Part one aired on TLC on Sunday, June 7 at 8 pm ET/PT. Part two will air on TLC on Monday, June 8 at 8 pm ET/PT.