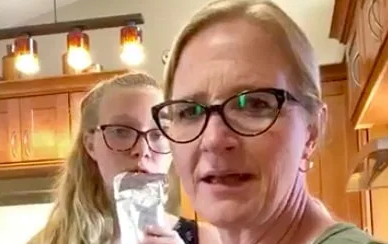 Sister Wives is currently in an off-season, but Christine Brown remains very active on social media.

Now, the four wives of Kody Brown have to be careful about what they say online so they don’t break their contract with TLC. But, Sister Wives fans enjoy getting a look into their lives as much as possible. Between Facebook and Instagram, Christine Brown does an incredible job of keeping in touch with her fans.

The 48-year-old TV personality took to Facebook to show off her latest creation in the kitchen. Gluten-free garbanzo-bean chocolate brownies. According to The Sun, the topic of conversations in the comments were pretty diverse.

Sister Wives fans discussed her kitchen, her outfit, and her cooking. But, there was one fan who wanted to discuss something more personal. Something that had little to do with the current video.

Now, Christine Brown was very engaged with her followers during this live broadcast. She was happy to answer questions. Interact with her followers. But, this particular question? It was clear she wanted nothing to do with it. In fact, Christine opted to scroll past the question. Purposely ignoring it. Snubbing the individual who asked about Kody Brown.

She, however, continued to answer all questions related to both her cooking and her clothing.

Vegan waffles!! Thanks @ysabelpaigebrown for breakfast! I’m not vegan but because these are the BEST waffles I’ve ever had!! I request them #vegan #waffles want the recipe? It’s here: https://www.facebook.com/groups/rosecoloredlularoe/?ref=share

So, where is Kody Brown right now?

Fans suspect Kody Brown opted to quarantine with his fourth wife Robyn during the pandemic. Considering one of the many fan theories is that Robyn is his favorite wife… It would make sense for him to have chosen to stay with her during the COVID-19 outbreak.

Now, some fans of Sister Wives take pretty big issue with Kody bouncing from house to house as he spends time individually with each wife. After all, aren’t they supposed to be one large family living within the same space?

Some fans believe the family would work better if they all lived in a shared space. Such as one large dwelling with enough space for all. It, however, is equally possible this would just create more tension and drama between the wives.

Woke up to @truelygracebrown with breakfast in bed then we played. Best. Morning. Ever. #coveryourassets #coolkids #blessed #momlife

Regardless of where Kody is right now, Christine Brown did recently enjoy a nice date night with him. So, fans have no reason to think there are issues in the relationship. Perhaps Christine just didn’t feel the need to dignify the question with an answer.