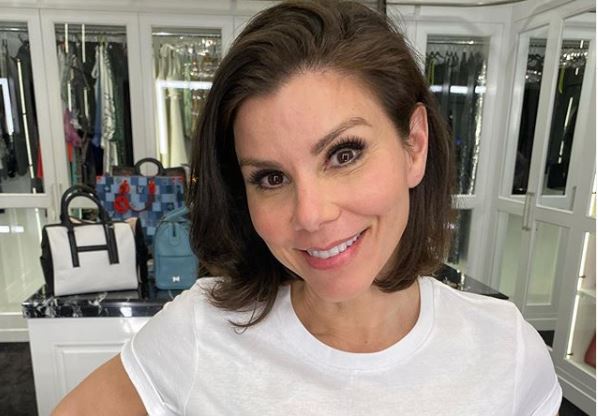 Heather Dubrow of Real Housewives of Orange County recently talked about a possible return to the show. She said, “never say never,” although she didn’t commit to returning, ever. She said there are great memories from her five seasons.

Dubrow said, “You know, the girl trips are really fun…I feel like we’re all sorority sisters.” Dubrow said while she loves running into the girls and reliving memories, she’s happy with her time on the show. The memories she has will sustain her and she wouldn’t want to sully those with new ones.

Heather Dubrow Says RHOC Is Going In A Different Direction

Dubrow is asked a lot if she’d ever go back to RHOC. Heather Dubrow said, “I feel like I’ve checked that box,” when asked if she’d return. She said, “I’m not really sure what it would take to go back.” She said she felt the show was in going in a different direction referring to Tamra Judge and Vicki Gunvalson leaving. Heather agreed with the changes which is why she doesn’t think she would go back. She said, “Honestly, I feel like as far as the franchise goes, the whole is greater than the sum of its parts.”

Heather did say it surprised her Tamra and Vicki left according to Hollywood Life. They’d been on the show for so long,” she said, “they’re both incredible women and they always have something going on.” She said there comes a time when the show needs change to stay current. Dubrow commended them both on their great runs as reality stars.

It’s also important to note according to Reality Blurb, the show is being led partly by Kelly Dodd. Dodd is one of Dubrow’s adversaries and doesn’t make coming back enticing. Several housewives from the past have made cameos in the show so it’s always a possibility she might show up on set one day.

Happy Easter everyone!!! Fun morning with a scavenger hunt, matching PJ’s and sweet treats ! Im hoping the kids save these bunnies marked with 2020, hand them down to THEIR kids someday and tell them the story about this period of time and how we got through it together ❣️🐣 Love all my little chickens ! @drdubrow @nickdubrow @maxdubrow @katdubrow @cocodubrow

Heather Says People Could Come Back On The Show

While she herself doesn’t want to come back, Heather Dubrow said the two OGs could make a return. When it comes to Tamra and Vicki, “they always have something going on,” she said. She also said they might find different opportunities as well.

Dubrow said her own journey of five years was a good run and she now is in the, “retrospectoscope, able to look back on it — just the real happy parts.” Heather is an actress who has several television credits to her name. She currently has a popular podcast, Heather Dubrow’s World where she talks about everything including the Housewives. Fans will wait to see if any of the Real Housewives of Orange County have something to say about her opinion on the different direction.