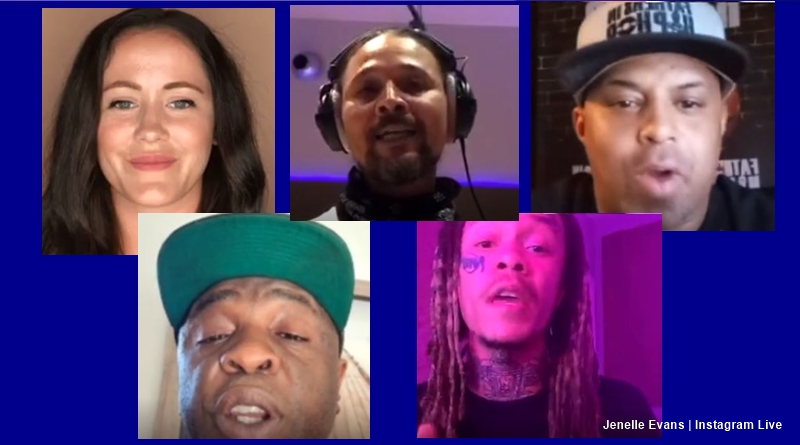 Teen Mom 2 alum Jenelle Evans got slammed for not sharing about the #BlackOutTuesday. But, she contributed something meaningful on Thursday night. Actually, many celebs got slammed for just posting a back box, instead of doing something positive. Jenelle talked with Bo Roc, Bizzy Bone, Justified Smith, and Kyd Knarly in a Live on Instagram.

While Jenelle seemed a bit late to the party, she obviously gave her approach a lot of thought. She told her fans in the Live that she planned a way to get people’s voices and opinions out there. Actually, using the #BlackLivesMatter hashtag aligned her squarely with activists who believe that post-n-forget black squares didn’t go far enough. But, it seems her many trolls never thought of that aspect of her Live. Predictably, relentlessly, and in usual boring fashion, they trolled her because she loves David Eason.

But, other people appreciated her efforts. Jenelle Evans said in her comments in the Live, “I wrote down notes about their organizations and key points to hit while talking to each person.” First up, came Bo Roc from The Dove Shack. The political activist and black business successes said, “I myself have been a victim of police brutality.” So, the current issues “hit home” for him. He denied that the protesters in the frontlines started the trouble. Bo Roc told the Teen  Mom 2 alum that the authorities treated them like “animals.” He feels policing should be more about working with the communities rather than”disciplining” them.

When Jenelle Evans spoke to Bizzy, he told her that young people might get pushed into violent acts. But, perhaps more talk and less violence, is the answer. Throwing bricks only results in more violence and more police brutality. So it seems he likes the idea of Jenelle’s platform to talk about his viewpoint. Bizzy noted that while the police officer got bumped to a charge of second-degree murder and his three companions also got charged, people want first-degree murder because it “sounds better,” But, he also noted that proving intent’s not always that easy.

Then, the Teen Mom 2 influencer spoke to Justified Smith. He’s part of an organization that focuses on back fatherhood. He told Jenelle that it’s unfortunate that black dads need to discuss dealing with the police with their kids. After all, they seem more likely to get into situations with them than other races. Jenelle asked him how she or other non-black parents could prepare their children for racial issues. He said that they need to hold those conversations and they “can’t sugar-coat the message.” Parenting plays a big part in raising kids with awareness, he told the Teen Mom alum.

Kyd Knarly, a rapper feels very deeply about racism in the USA. He believes that Martin Luther King benefited because he “had Congress behind him.” He agrees that Congress should step up and start doing something positive against racism in the country. He believes that people with massive followings and big voices should approach Congress for action on it. After all, they don’t seem to listen to those people with less reach.

#BlackLivesMatter 💓 @boroc.doveshack @mrmccane @fathersinhiphop @kydknarly Thanks for sharing all your views and opinions. I’m so happy you got to speak up about everything that’s occurring.

What did you think about the way Jenelle Evans from Teen Mom 2 hosted an interesting Live with different voices from the community of color? Do you feel she did way better with it than those who just post-n-forget a black square? Sound off in the comments below.