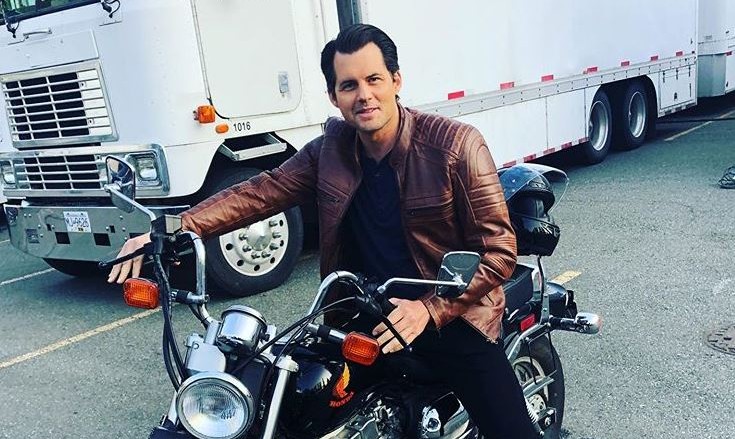 Hallmark star Kristoffer Polaha is now going to share some of his other talents! He is co-authoring a new romance book series. What do we know about his new venture into the romance genre?

The first novel, Moments Like This, will be released on February 2, 2021. Set in Hawaii, this is the story of a woman who has lost both career and relationship. She is in Hawaii trying to find herself. More books will be released in the future.

How is this partnership set up? Gomez explained that her storytelling, coupled with Polaha’s “vision” that will bring the characters to life is the essence of their special partnership. She gratefully explained that “It’s a rare thing, when someone comes along who understands your words and the purpose of your work.”

Moments Like This (from Kona with Love Series Book 1) is being published by Rosewind Books, a division of Vesuvian Media. The intention is to adapt the books into films and TV movies. He also shares that he wants some control of how the book is translated into the visual product.

“In the constantly shifting Hollywood landscape, we are endeavoring to enlarge our creative footprint by creating content for the publishing world first, and then adapting the stories that people love straight to film while keeping the creative team behind the stories in control from page to screen.”

Kristoffer Polaha Is A Hallmark Hunk

Of course, if you are a Hallmark fan, you know who Kristoffer Polaha is. He currently stars in the Mystery 101 series with Jill Wagner. Most recently, he was in the Christmas movie, Double Holiday. And of course, he was that REO-loving bad boy in the Dater’s Handbook, co-starring pre-Prince Harry, Meghan Markle.

He called working with Markle a “blast.” Now that the former royal has returned to private life, could she possibly star in one of his adapted novels? This sort of onscreen reunion would be quite welcome.

The highly anticipated Wonder Woman 1984 is being released in August, and Polaha is one of the stars. How did he get this role? He explained to Variety that back in 2013, he didn’t get the lead role in the pilot for the ABC show Betrayal. Patty Jenkins really wanted Polaha in the role. Subsequently, she sent him an absolutely “beautiful letter.” She shared that she believed in his talent. This missive promised that they would work together one day. When the first Wonder Woman came out, he congratulated her and commented on some of the unique ways she made this movie. So, fast forward a few years, he is now in the  new Wonder Woman movie!

Life in a big budget movie is quite a change for this affable actor. For example, it took 14 hours to film 1 2/8 page of a script. What a luxury! Hallmark movies move at a faster pace.

So, who is Polaha portraying in this superhero movie? That is a huge secret. He told Hallmark’s Home & Family that this is a “very small role,” but, added, “a very pivotal role. The best part of this was that he got to work with Gal Gadot. And the other great part? Working with Patty Jenkins. This is proof that being a nice guy is what matters.

Hallmark fans can find out Kristoffer Polaha’s top secret role when the movie is released on August 14, 2020. His first co-authored romance novel, Moments Like This, with Anna Gomez/Christine Brae will be released on February 2, 2021.

‘ILAMB’ Star Liz Blasted For Holding Back Her Son
Jamie Lynn Spears’ Parents Wanted Her To Give Up Her Baby
‘7 Little Johnstons’ Family Photos: Who Is The New Guy?
Hallmark’s 2021 Countdown To Christmas Movies: All Premiere Dates
Tori Roloff Promises To Share ‘Madness’ Of Recent Move