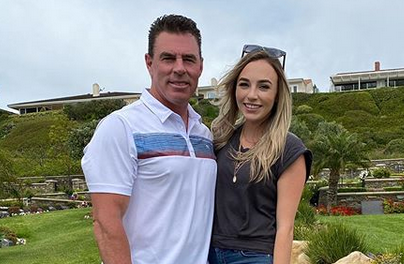 On Wednesday, June 3, former Real Housewives of Orange County star Jim Edmonds posted videos from his daughter Lauren Cantral’s gender reveal party. Jim and his family first visited the grave of his late wife, LeAnn Edmonds-Horton. Then, they found out the gender of Lauren’s baby with confetti poppers and cupcakes. The post reveals that Lauren’s first baby will be a girl. The RHOC alum celebrated this event with his girlfriend Kortnie O’Connor, daughters Hayley Edmonds and Lauren, and Lauren’s husband Dylan Cantral.

The next video shows Lauren biting into a cupcake. She shows the middle of the cupcake, which is pink, to confirm that the baby is in fact a girl. RHOC star Jim captions the post, “Feeling very grateful for every moment of life. Congrats Lauren and Dylan. 3 out of 4 wins for gender battle lol Hayley #babygirlontheway #grandpa.” Lauren comments, “Thanks dad! I’m so glad you were able to be here with us!! Baby girl is already so loved!” The family is so excited to welcome the new baby. Fans congratulate Jim and his family in the comments of the post.

RHOC alumnus Jim is not only the father to Hayley and Lauren. They are his first two children, whom he had with LeAnn. LeAnn died of cancer in 2015. Jim then married his second wife, Allison Jayne Raski. He had two kids, Landon and Sutton, with Allison. With his most recent wife, Meghan King Edmonds, he had three children, Aspen, Hayes, and Hart. Jim and Meghan have now split. Nonetheless, Jim and his kids are happy to invite Lauren’s baby girl into their family.

While Lauren is preparing for her first child, Jim has some things to sort out with ex-wife Meghan. The two divorced in late 2019 and are in the middle of an argument over their prenuptial agreement. Furthermore, Meghan claims that Jim isn’t paying enough for child support. However, Jim says that this isn’t true. The former RHOC stars are also discussing custody over their three children. Both Jim and Meghan have been traveling a lot over the past few months, so the kids have been back and forth between their mom’s and dad’s houses. Based on Meghan’s Instagram posts, it seems that the kids are spending most of their time with their mom.

I’m sick of the ABUSE. Here’s MY TRUTH. #LinkInBio

Are you surprised by the news that Jim is going to be a grandfather? Let us know in the comments and check back with TV Shows Ace for more updates on your favorite shows.