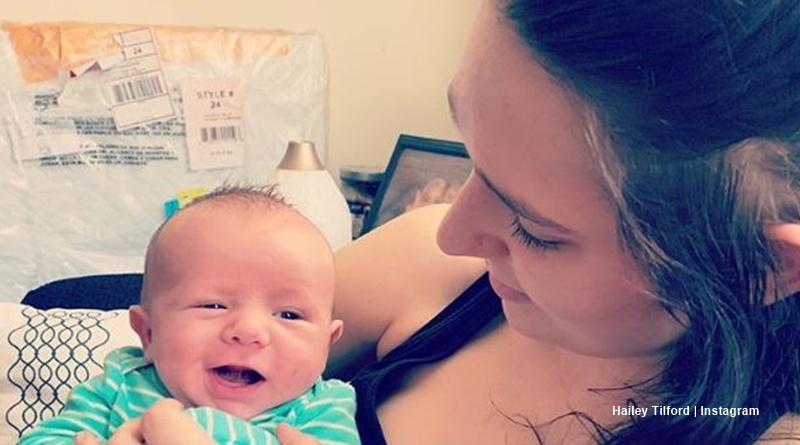 Unexpected fans followed Hailey Tilford through her pregnancy. She and Matthew Blevins fell out. And, he still denies paternity of baby Levi. Hailey often shares photos of her cute little boy. Fans think he’s totally adorable. Now two-months-old, none of them understand how Matthew could distance himself from such a darling little “peanut.” But, some fans hope that Cole’s actually his dad.

Taking to her Instagram on Tuesday night, Hailey popped up a photo of Levi. She captioned it with, “2 months old.” Plenty of fans mentioned how time flies. Most of them agreed that Levi looks very cute. One fan wrote, “Tiniest little peanut he’s so perfect!!” But, as Matthew denies paternity, others discussed who he looks like.

One Unexpected fan suggested he looks like “his mom.” A few decided that he looks a bit like “Matthew.” However, others agree that Levi’s a spitting image of  Cole. Many people warmed to Hailey Tiflord as she went through her journey to motherhood. So, they don’t diss on her all that much these days. While Matthew moved on, they like that she and Cole date. Cole and Hailey met at high school before Matthew came along. He takes on the role of a father to Levi. Fans like that a lot.

Fans discuss paternity on the post of Levi the ‘peanut’

One fan shared their thoughts on Levi and Cole. They wrote, “You should totally get a paternity test because that little man looks just like Cole!!!!!! I know girls feel ashamed or something when they say they know who the father is and then it turns out to be someone else. but I think in this situation I speak for everyone when I say We all will be beyond happy if he is Coles and (not that other guy), (sic).”

One Unexpected fan disagreed, saying, “That’s definitely Matthews baby,(sic).” However, another fan agreed the child bears a strong resemblance to Cole. They noted, “He looks so much like Cole…… are you sure he’s not biologically his…….?”

Notably, nobody trolls on Cole about it. One thing they all agree on is that Levi’s the best little boy and time flies. As one fan said, “Girl it’s gonna flyyyyy by. Before you know it you lose track of these monthly things and he’ll be a year.”

The backstory to Matthew and Hailey Tilford

Newcomers to Unexpected might not know the background of Matthew and Hailey Tilford. The Ashley’s Reality Roundup summarized it. They noted that Matthew missed the birth of Levi. The outlet explained, “Hailey 1 [Tomlinson] and Hailey 2 [Tilford]…were best friends before Hailey 2 cheated with Matthew, who was Hailey 1’s then-boyfriend.”

What do you think of the photo that Hailey Tilford shared of Levi at two-months-old? Do you agree he looks a bit like Cole? Sound off in the comments below.

‘LPBW’ Matt Roloff Making The Rounds Like A Rockstar
‘Bringing Up Bates’ Fans Worry About Josie’s Baby, Wonder What’s Wrong
‘LPBW:’ Wait! Does Jackson Roloff Have A Speech Problem?
Protective Order Issued In Josh Duggar’s Case
Jill Dillard Shows Off Her Garden – Does She Have A Green Thumb?