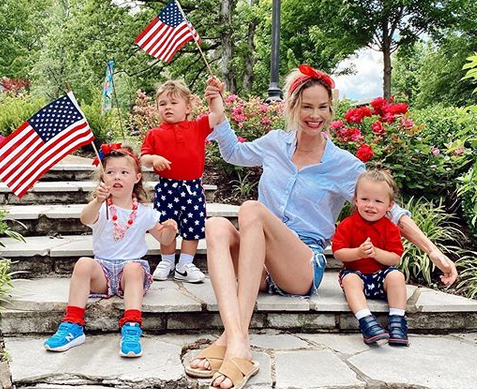 Real Housewives of Orange County star Meghan King Edmonds has been spending a lot of time with her three children at home. Her twin boys, Hayes and Hart, will be two-years-old this weekend, and Meghan is starting the celebration early with her family. The RHOC alumnus posted pictures on her Instagram story of the birthday festivities. Meanwhile, the twins’ father, Jim Edmonds, was enjoying some nice weather with his girlfriend, Kortnie O’Connor.

Meghan prepares with balloons and cupcakes

On Tuesday, June 2, Meghan posted a selfie with a car full of red and yellow balloons on her Instagram story. She announced, “The twins are turning 2!” She hinted at the theme of the party by adding a Mickey Mouse sticker to the post.

Next, the RHOC star posted a video of her three-year-old daughter, Aspen, decorating cupcakes. While Aspen is sitting on the floor putting Mickey Mouse toppers on cupcakes, Meghan asks her who the cupcakes are for. “For me and the boys for the birthday,” Aspen replies with a smile.

After Meghan and Aspen got everything ready for the twins’ birthday party, they finally showed Hayes and Hart their birthday surprises. Meghan posted a picture Mickey Mouse cupcakes that Aspen helped her decorate. “Look!” Meghan captioned the post, “I’m a Disneyland mom!” and added a laughing face emoji. The Disney theme was complete with Mickey Mouse plates and napkins, along with a balloon that looks like Mickey.

Of course, Meghan had to post a video on her story of the boys eating their birthday treats. Hayes and Hart seemed to enjoy the cupcakes, as both had chocolate-covered faces in the video. One of the boys can be heard asking for more at the end of Meghan’s story. The RHOC star also shows off a pot of her family’s favorite meal, macaroni and cheese.

Jim misses out on Hayes and Hart’s birthday party

While Meghan’s stories show that a few guests came to the party, Jim didn’t appear in any of the pictures or videos. He was, however, on his girlfriend Kortnie’s Instagram. Kortnie posted a video of her and Jim laying out in the sun.

Jim is the father of all three of Meghan’s kids. After a five-year marriage, the couple divorced in October 2019. Since then, Jim has started dating Kortnie and Meghan has announced that she has a new boyfriend, Christian Schauf. Although Jim and Meghan have both moved on to new partners, they are still not on speaking terms.

I guess if it’s in @people, it must be true… 😉 I’ll just say this: I’m happy and looking forward to writing my next chapter 😊

Do you think the boys will get to celebrate their birthday with their dad? Let us know in the comments and check TV Shows Ace for more updates on RHOC stars.