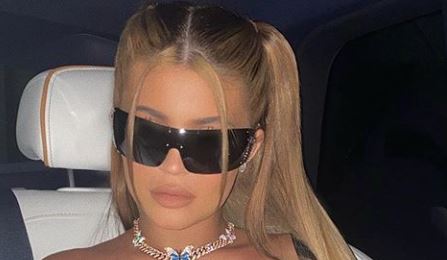 Kylie Jenner allegedly went on a multi-million dollar shopping spree. She made million-dollar real estate deals, purchased a private jet, and bought expensive gifts. However, this was months way before Forbes stripped Kylie of her billionaire status.

In the month’s leading up to Forbes announcement of Kylie Jenner she spent a lot because she can afford it. Kylie supposedly purchased real estate, including a $36.5 million mansion in the Los Angeles area. She also bought a $15 million empty lot in Hidden Hills, California. Around that same time, a source said that the young beauty also purchased a private jet. She also allegedly gave her siblings “expensive crystal clutches.” Being the giver Kylie Jenner is she did donate $1 million to coronavirus relief during the early stages of the pandemic.

The Inquisitr has reported, Forbes released a report titled “Inside Kylie Jenner’s Web of Lies — and Why She’s No Longer a Billionaire” last week. The report alleged that the Kylie Cosmetics founder lied and that her company was “significantly smaller and less profitable” than what everyone had been led to believe. Forbes also accuses the 22-year old CEO of lying on company reports and forging tax returns.

Forbes claimed that Keeping Up with the Kardashians, momager Kris Jenner campaigned heavily for Kylie to grace the cover of the issue. These allegations Kylie and her team strongly deny. Kris and Kylie, have gone into damage control over fears that this article could damage the family’s reputation. Because, Kris has spent years building it into a successful empire.

Will This Hurt Kylie Jenner

Kylie’s attorney, Michael Kump said that the Forbes article was “filled with outright lies.” Kump demanded that Forbes “immediately and publicly” retract the claims. However, Jenner took to her Instagram to respond. The young entrepreneur wrote, “I thought this was a reputable site. All I see are a number of inaccurate statements and unproven assumptions lol. I’ve never asked for any title or tried to lie my way there EVER. period.”

Forbes issued their own statement saying they stood by the story, and before they published the story, they had spent months vetting the facts. The report accuses Kylie Jenner and her team of lying, although it cannot prove that any documents were faked. Unfortunately, the article has allegedly done some damage with Coty’s shares plummeting last month 13 percent.

This new information about Kylie spending like she’s a billionaire may not sit well with Kris Jenner. The Kardashian matriarch is supposedly, “freaking out” because she’s afraid this will hurt their brand. Kylie Jenner will get past this, when you’re famous everyone is always out to bring you down. She may not be a billionaire, but that doesn’t mean she’s poor and can’t afford her lifestyle.