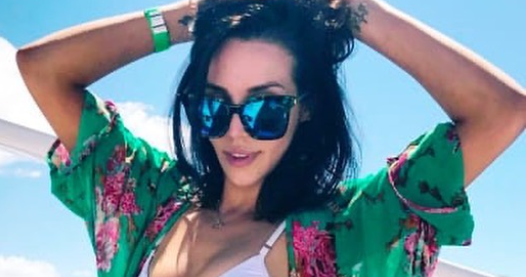 Kristen Doute just had a book release where she revealed some behind the scenes information about Vanderpump Rules. One thing she has been asked about the most is her feud with Stassi Shroeder and Katie Maloney. The three have not been friendly after disagreeing over Kristen’s love life.

A member of Vanderpump Rules’ cast for eight years; Kristen has gained quite a reputation for herself. Even actress Jennifer Lawrence called her a, “recovering psycho,” when she was on Watch What Happens Live with Andy Cohen. Doute watched the clip and stated she was just glad Jennifer knew her name. Kristen knows that is the perception fans have of her from the show and she doesn’t necessarily hate it.

What Did Kristen Doute Say About The Feud?

When it comes to her persona, Kristen Doute told the Washington Post, “I don’t blame the show or anything for not showing more sides of me… but I’m not a one-dimensional person.” She understands there are more stories to film.

Doute co-wrote the book with the author of, “How to Lose a Guy in Ten Days”, Michele Alexander. She said the author asked her, “Why do your friends think they know better for you than you?” She was referring to Stassi and Katie disagreeing with her and Carter’s relationship.

Kristen said, “they were very vocal in expressing their disappointment to me and him for not moving on.” The three had a falling out over her and Carters on and off relationship.

Kristen Said She Owns Her Crazy In The New Book

When asked if she wrote the book to fight against the crazy label, Kristen Doute said the opposite. Doute said crazy, “means that we’re passionate and we care and respect ourselves.” Kristen wants to take the C-word back and not give it power. Kristen says the book focuses more on lessons learned than exposing secrets. She said Michele was a 50/50 partner in writing. They learned as they went through stories there were a lot of universal truths. Dating and the way they were feeling matched up in a way she thought would resonate with most women.

When asked about the recent report that editing plays a huge role on the show, Kristen said shocked would be an understatement. She was referring to a Vanderpump editor saying Scheana was edited as desperate with Stassi and Beau Clark being the “heroes.” She said she felt for Scheana and thinks she was the hero of last season.

Doute said she didn’t personally know the editor but couldn’t believe she would speak about it. Kristen’s book, “He’s Making You Crazy: How to Get the Guy, Get Even, and Get Over It, is available now on all outlets.

‘Horrible’ Photos Of Josh Duggar With Minors Resurface Following Arrest
Viewers Are Here For ‘Thicc B*tch’ Corey Of ‘Too Large’
Erin Krakow Wants Lori Loughlin To Return To ‘When Calls The Heart’
‘General Hospital’ Spoilers, June 11-14, 2021: The Race To Save Chase
Can Romance Be Rekindled? Find Out In Lifetime’s Thriller ‘Lethal Love Letter’