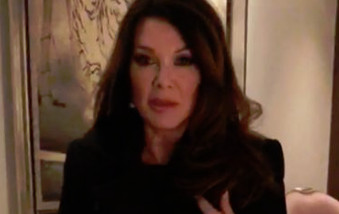 Protecting her restaurants! A day after Lisa Vanderpump spoke out about the destruction caused by riots, VPR stars helped board up her L.A. restaurants.

As you’ve likely seen on the news, many of the protests in response to George Floyd’s death have turned violent. Businesses in cities across the country are facing damage by looters and rioters taking advantage of the chaos. (To be clear – the author is not lumping looters and vandals with the peaceful protesters.)

On Monday, Lisa took to Instagram to show her support for the peaceful protests. In a lengthy post, Lisa reflects on the reason for the protests and the “heartbreaking” destruction.

The VPR star writes that she is “deeply saddened” by George Floyd’s death and the aftermath. She believes the protesters should “be heard.”

Lisa goes on to explain that she believes in “peaceful protests.” While she doesn’t outright condemn the looting and rioting, she calls the violence and destruction, “heartbreaking.”

Lisa’s lengthy caption accompanies a photo with the quote:

“Enough is enough,” she states.

I am deeply saddened by the tragic events of the past few days. This is about our shared humanity. Everybody deserves to feel safe in this country. Everybody deserves to feel valued, and heard. Nobody should have to face the fears that so many people face daily. I feel for each and every person who feels marginalized or persecuted in their community. It is not right. I am a big believer in peaceful protests – it is so important to be able to gather and be heard with regards to the causes you believe in. And this cause, and fighting this injustice is so important. The violence and destruction that accompanied some of these protests is heartbreaking, and it’s devastating to see the hate and the hurt that so many people are feeling. “Justice will not be served until those who are unaffected are as outraged as those who are.” Enough is enough.

The responses to Lisa’s post went both ways. Some followers fully supported her words. However, one follower believes that Lisa will be upset if SUR is targeted by vandals.

Lisa informed them that some of her restaurants were, in fact, damaged. She writes that the restaurants suffered “minimal” graffiti, Us Weekly reports. See a screenshot of the exchange:

However, she doesn’t say which restaurants suffered graffiti. Lisa owns several restaurants in L.A., including PUMP, TomTom and SUR, where VPR films.

Due to damage or precaution, boards are going up in front of some of Lisa’s L.A. restaurants. As fans know, some parts of California still aren’t allowing eat-in dining. As a result, Lisa’s restaurants haven’t reopened yet.

The Daily Mail has photos and video footage of boards going up on the doors of PUMP restaurant in L.A. SUR is next door to PUMP.

With SUR closed and television production temporarily on pause, it’s unclear when VPR will begin filming Season 9. In fact, Bravo has yet to even confirm there will be another season.