Bachelorette alum Tyler Cameron joins the growing list of celebs using their platform to join the black lives matter movement. As we’ve previously reported, fans across multiple reality TV shows are calling on TV personalities. Calling on them to use their platform to support black lives matter. Just a few hours ago, Tyler Cameron, who has a following of 2.3 million on Instagram, did join the ranks.

Initially, Tyler’s 2.3 million Instagram followers might’ve thought something was wrong with his profile. This is because when you arrive on his profile his most recent Instagram post looks as if it is struggling to load. All viewers see is a large back square. Tyler connected more than one photo to the post.

“BLACK LIVES MATTER,” he pens in all capital letters in the caption.

Swiping over, Tyler Cameron also attached a large red image with black lettering. The snap was packed full of names. Who were these people? Well, they were the names of people who were victims of of racism. George Floyd’s name could be found stretched across the bottom. 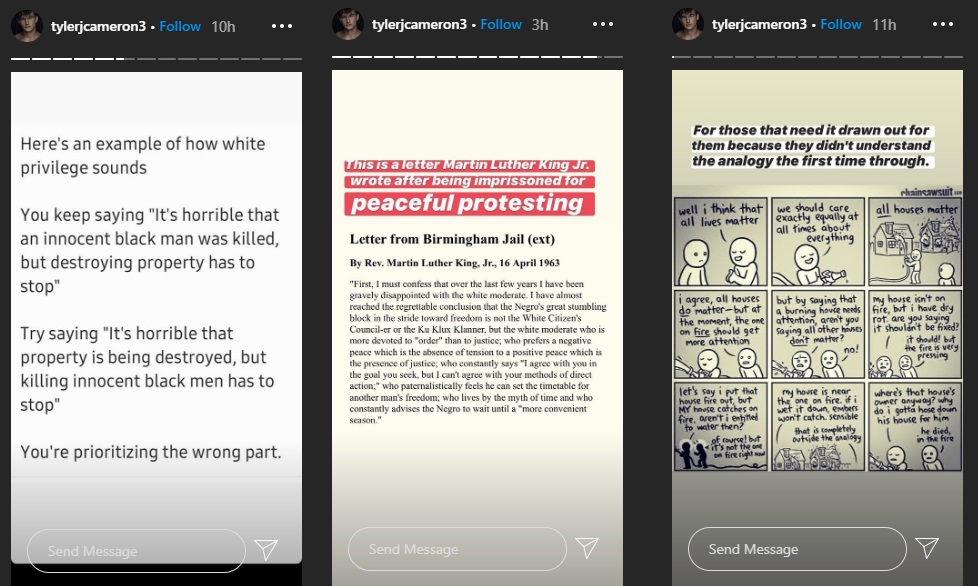 While Tyler Cameron’s post was relatively simple, it still sent a very strong message. Moreover, he has also been very active on his Instagram Stories. He’s posted several photos and conversations related to black lives matter.

He also shared a TikTok video he believed shared a very powerful message about why black lives matter is more important than all lives matter right now.

In hours, the post accumulated just shy of 60,000 likes and nearly 300 comments. One comment, that many presumed to be a troll or bot account, quickly soared to the top of the list. With nearly 30 likes, the comment reads “unfollow.” Tyler Cameron, and many of his followers, told the individual variations of “goodbye” and “good riddance.”

Tyler Cameron also had many who declared their love and appreciation for the post. “This is how to use your platform properly!!!!” One follower gushed.

Donate, self-educate, have the tough conversations with your friends and family. We all have to take action, we all have to listen. All lives will matter WHEN Black lives matter too.”

Being such a controversial topic, the comment section did have some explosive conversations. One individual noted “all lives matter” in all capital letters. Others were quick to shut this down.

Overall, however, Tyler using his platform left fans excited. Sound off in the comments down below.

Sabrina Burkholder Gives Heroin Addiction Update
‘Welcome To Plathville’: Why Isn’t Hosanna Plath On Her Family’s Show?
Jessica Batten Of ‘Love Is Blind’ Gets Happily Ever After
Separation Over, Isabel & Jacob Roloff Back Together
Lance Bass Dishes On His ‘BIP’ Experience, Plus Engagement Predictions