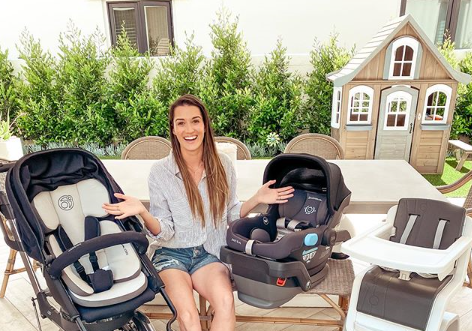 There’s nothing more exciting in Bachelor nation than a baby announcement. Jade Roper and Tanner Tolbert are expecting their third Bachelor baby. The two are already parents to daughter, Emerson and son Brooks. Roper has been having a rough time with this pregnancy as she shared on her podcast, Mommies Tell All.

She said at thirteen and a half weeks just into her second trimester, she’s starting to feel a little relief. Roper said, “I’m still sick, but it’s not even near what it was. I was so, so, so nauseous and vomiting and the fatigue and the brain fog. It’s so rough.”

This was our runner-up photo for our pregnancy announcement! 🤣🤣 Taking photos with two kids is like trying to herd cats, we took at least 500 pictures, but we truly got some hilarious ones. Haha. I wanted to say thank you so much to everyone for all the kind wishes and congratulations and for always being so wonderful as our family grows! We are so excited to be blessed with another child. I will be posting more updates very soon! Do you want bump progress photos? I feel I am already showing so much more this time around!! Also, I always say following your own motherly intuition is best way to parent, because we know our kids best, but I’m always open to learning as well. That being said, hit me with your best advice on raising (surviving lol) a family of little kids so close in age if you’re in the thick of it or have been through it! ❤️❤️

Jade Roper Is Struggling In Quarantine

Jade Roper also shared about quarantining in the house with her family. She said, “I’m taking care of two kids and a husband who feels lost.” Her youngest Brooks has started sleeping through the night allowing her more sleep. Jade said the nausea for her gets a lot worse at night. Roper said, “I was dealing with terrible nausea and fatigue, on top of taking care of two kiddos during a pandemic,” and it weighed on her.

Roper said of the pregnancy, “I truly believe babies being born during this time are here for a special reason, to be light workers. We are beyond happy to love another baby.” She is also thrilled her three children will be so close together according to US Weekly.

This Third Baby Came As A Surprise To The Couple

Jade Roper and Tanner didn’t plan this pregnancy and he told everyone on Instagram. He said this was, “very much an accident and very much a surprise. They announced the reveal with, “here we grow again.” The picture shows Roper with her two children and Tanner lying face down on the floor with the test.

The reality star shared another picture that was an outtake from the shoot where Tanner still looks knocked out from shock, but Emerson is crying about it. With that post, she asked her followers if they wanted bump pictures. She said, “I feel I am already showing so much more this time around!” She also asked for advice from parents with three kids under three. Several fans reached out with some advice and their support. In her Mother’s Day post she praised all mothers saying, “As if being a mom isn’t already a fulltime job, moms are wearing SO many hats right now.” These hats included, “employee, teacher, entertainer, chef and of course –– parent.”

Jade said even though this is a time of uncertainty, they are thankful for the baby and can’t wait. Fans will continue to follow along her journey and look forward to pictures of another Bachelor Nation baby.