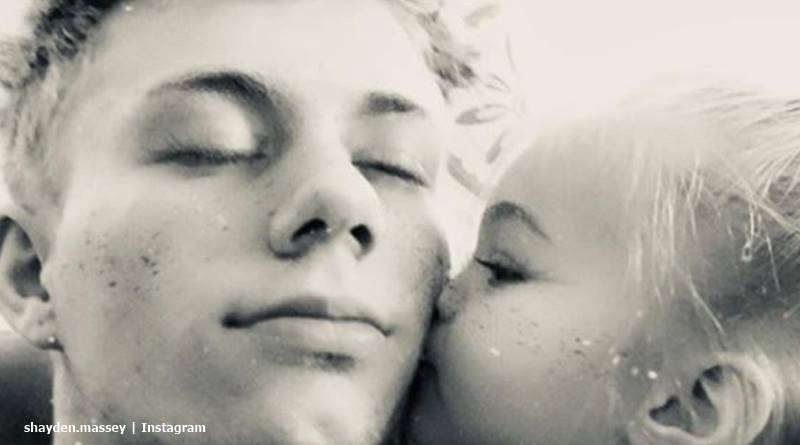 Shayden Massey and Lexus starred in Season 1 on TLC’s Unexpected. Fans followed the journey of Lexus and Shayen as they welcomed and raised their baby girl, Scarlett. Lexus and Shayden split after he accused her of cheating on him. But, fans hoping for more about Shayden in a future season will be disappointed. He says he rejected TLC’s offer. However, Scarlett, Lexus, and her mom signed on for Season 4.

Shayden Massey describes TLC as a scripted, he won’t return

Last week, Shayden took to his Instagram and shared that he rejected an offer from TLC for a new season on the network. In a long post, he described how he dislikes the show. Plus, he described the pay as “scrap change.” He also accused the network of “scripting” much of the storyline. Dishing his feelings about the show, Shayden slapped at TLC, terming them “corrupt” and “fake.” However, Lexus opted for signing up again.

Lexus and Shayden split and we noted he accused her of cheating. That allegedly came when he spent time serving a weekend jail sentence. Since then, Hayden revealed that he expects another baby with his girlfriend Kylee this year. Even though he and Lexus no longer live together, it’s quite possible that TLC could still write him into the story. However, Shayden Massey totally rejects the idea. Starcasm reminds readers that so far, it looks like only “Hailey Tomlinson (but not Hailey 2) and Tyra Boisseau” return for Unexpected Season 3. But now, Lexus opted in as well, according to Shayden.

Inside his post comments, Shayden addressed the fakery that annoys him so much. He told his fans that the “entire network” produces “fake” storylines. As an example, he reminded fans about “the second season.” That involved Lexus accusing him of “cheating.” However, he’s angry because he alleges that took place “almost an entire year before they even asked us to be on the second season.”

The young Unexpected dad accused the production team of asking him to “make [himself] cry.” Shayden then accused TLC of inventing “sh-t for [them] to say.” Admittedly some of it came over as “good…but most bad,” he added. Shayden Massey explained that he felt it not worth the time. Noting their “40 hour check with [a] minimum wage,” the disgruntled Unexpected dad said that TLC  called “it a gift as if the babies aren’t entitled to it.” Emphatically, he stated that he won’t be part of that.

Plenty of fans already suspected that the show’s party scripted. One follower wrote, “AMEN! Finally! That show is FAKE ASF! They tell you what to say. Glad someone else finally admits it dude.” That came from Hailey Tilford, the girlfriend of Matthew Blevins who apparently caused the split between him and Hailey Tomlinson. 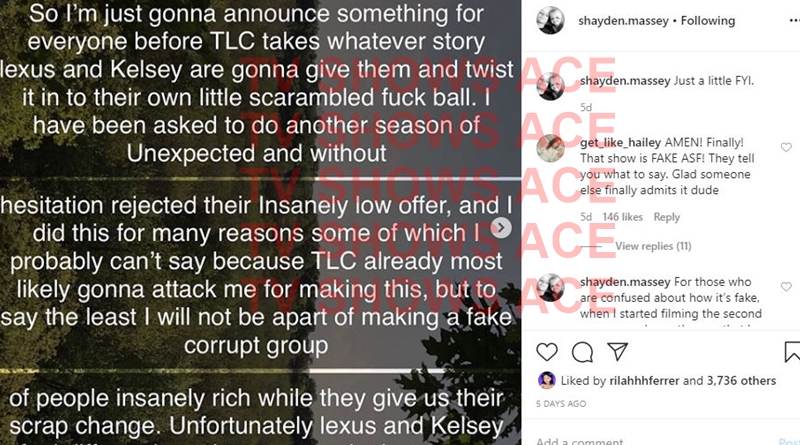 Another follower who claimed she nearly joined the Unexpected show, told fans that the pay’s definitely low. She said, “$425 dollars for the teen mom and $425 for the teen dad then the grandma’s (teen moms and teen dads moms) get paid $300 and the grandpas (teen moms and teen dads dads) get paid $200. they said if you return it’s a lot more but you have to negotiate in order to get it.” Notably, that money’s paid “per episode” that features them.

If you think the potential Unexpected mom told fibs, well, Shayden Massey replied. He said, “glad someone said how much lol I probably can’t.” 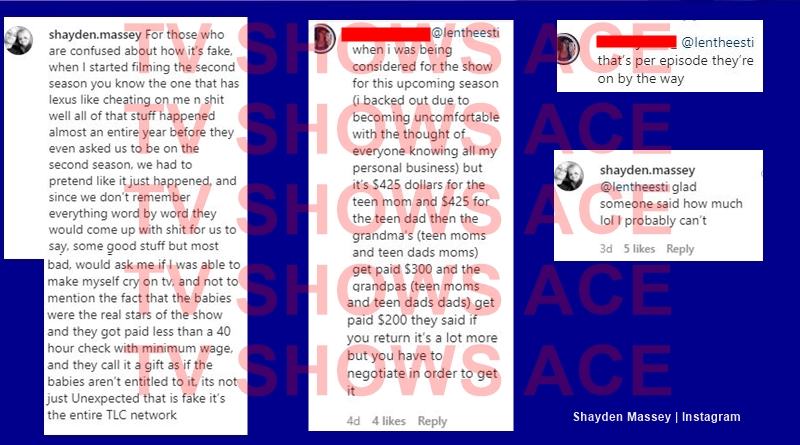 What do you think of all the alleged fakery that goes on with TLC? Do you agree with Shayden Massey that working for that amount of money seems a bit of a rip-off? Sound off in the comments below.