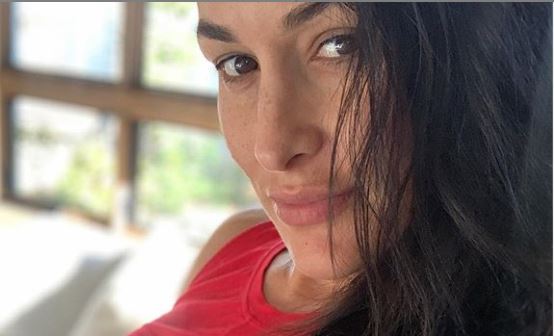 Nikki Bella and Artem Chigvintsev became engaged on a romantic trip to France. However, Nikki almost caught Artem with the ring. In a sneak peak of Thursday’s episode of Total Bellas Nikki walks into the room. Artem is discussing his plans to propose to twin sister Brie Bella.

Brie says, “Artem asked me to pick up the ring and bring it all the way to France, he is proposing to Nicole, and I don’t know what she’s going to say.” While in France, Artem meets with Brie to check on the diamond. Brie says, “I put it in my mom’s closet.” She didn’t trust Nikki not to go through her luggage. Nikki seeing Brie and Artem says, “you’re staring at me with the creepiest smile.”

However, Nikki just wanted to be alone with Chigvintsev.

Nikki Bella Can Keep A Secret

Nikki Bella posted on her Instagram in January about accepting Artem’s proposal in France two months prior. “Excited for 2020 and the next decade with you @theartemc ❤️ I said yes in France in November,” she wrote, “We have been trying to keep it a secret but really wanted to share our excitement for the New Year!”

Weeks later according to People Nikki shared with them her and Artem were expecting their first child together. No one saw this coming after the public break-up Nikki had with ex-fiance John Cena. Not only is Nikki Bella pregnant but, her twin sister Brie and her husband Daniel Bryan are expecting. Just weeks before Nikki and Artem are due.

What A Difference A Year Can Make

Nikki recently told her sister on an episode on their podcast, “Some relationships, it takes a little bit to fall in love with that person—which is normal and okay—and sometimes you fall in love the minute you see someone or after the first date. That’s okay too. If you’ve been in that situation, you become wishy-washy because you’re fighting so many emotions.”

Artem Chigvintsev met Nikki Bella when he was her professional dance partner on Dancing with the Stars in 2017. Nikki discussed when the two first started dating after her public breakup with Cena. “I had that conversation with Artem. I told him, Look, I have good days and I have bad days, but I don’t want to lose you. If you want to put up with what I’m going through and stay by my side, do it. If you want to walk away and we come back to this relationship down the road, I one-hundred percent understand,” say’s Nikki. Of course, Artem decided to stick it out and stay by Nikki’s side.

You can watch Nikki and Brie on Total Bellas on Thursday’s on E!