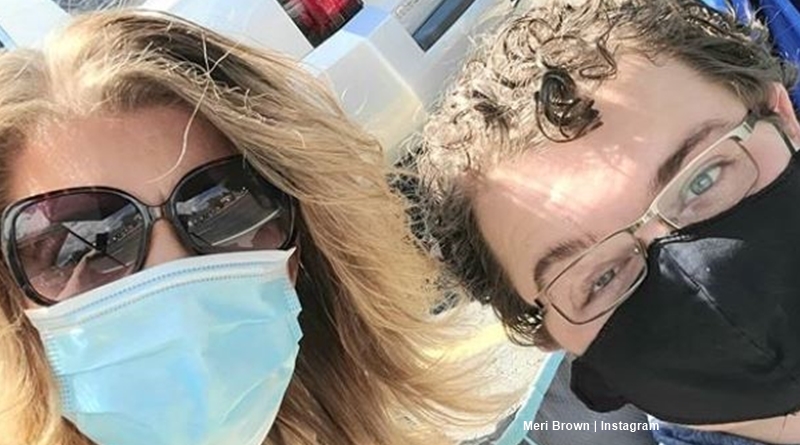 Meri Brown and Dayton, Robyn’s son, attended Gwendlyn’s graduation parade on Saturday. Flagstaff people social distanced, but they found a way for celebrations. Gwendlyn shared a short video clip on her Instagram. Meanwhile, other Sister Wives‘ family members watched it all on the livestream.

Meri Brown and Dayton enjoy Gwendyln’s  graduation from the sidewalk

It looked like a nice warm day in Flagstaff as people gathered along the roadside. Gwendlyn, the daughter of Christine and Kody Brown, now 18, celebrated her graduation in an unusual way. She admitted that she expected a rather lame affair. But, she seemed delighted at the way the town honored the students.

Meri Brown and Dayton took a selfie together and that showed they both looked rather hot. One fan pointed out what a lovely “warm day” it was. People brought out their chairs and set them up along the sidewalk. Everyone seemed well-spaced out in family groups. In the second photo that Meri shared on her Instagram, they awaited parade with the mountains making a pretty backdrop.

Dayton and I watching from the sidelines (or sidewalk??) as our graduates get ready for their graduation parade. It's how we do graduations in Flagstaff! 💙💙💙 #LivingMyWhy #BecauseICan #LoveWhatIDo #LoveWhoIAm #Family #ClassOf2020 #CovidGraduation #Flagstaff

Logan and his girlfriend Michelle Petty watched it all via Livestream. Michelle commented on Meri’s post about it. Meri knows that works quite well. After all, she mentioned that’s how she watched Hunter graduate from the Airforce Academy. Gwendlyn’s video clip showed how it worked. She shared a short video of her standing up in the back of a truck. Her video never showed who drove it but presumably, Christine or Kody did that.

A long line of trucks festooned with balloons drove along. Grads like Gwendlyn wore their caps and gowns and waved at the onlookers. Gwendlyn said in her post, “Video Footage of me graduating in the coolest way possible.” Talking about the people who turned out to watch, she wrote, “I expected a very boring attempt at a graduation, but they showed up.” On her post, Meri Brown said, “It’s how we do graduations in Flagstaff!” But, Gwendlyn, despite enjoying the day, hopes it’s not the future for all students.

Video Footage of me graduating in the coolest way possible. I’m so grateful to the staff and faculty at my school for putting all that work into giving us a good graduation and even in parade form. I was super skeptical about this and just struggling to enjoy myself bc I had expected a very boring attempt at a graduation, but they showed up. School faculty is underrated and I’d 100% be down if this was how people decided to have graduations from now on.

Meri Brown love the way it all worked

On her Instagram post about the graduation, Meri told Michelle Petty, “I love the way we all just adjust and make it work.” Actually, that seems very much in line with Meri’s character that fans of Sister Wives see on their TV’s. After all, buying and building up her BNB, Lizzie’s Heritage Inn seemed impossible at one stage. But, she made it work.

These days, fans suspect that she and Kody Brown work on their relationship. Maybe Meri Brown and Kody made some comprises and adjusted their attitudes. TV Shows Ace reported that Ysabel let it slip in a Facebook Live, that Kody spent the night with Meri. And, it looks like  Meri Brown’s on the rotational visit list along with the other wives. It all sounds rather complex, but one thing fans know is that Gwendlyn won’t consider polygamous marriage. The Sun UK reported that she says she’s way to “selfish” for that lifestyle.

What did you think of the way Flagstaff made a special effort for Gwendlyn’s graduation day parade? Are you happy to see Meri Brown out and about with the Sister Wives family? Sound off in the comments below.