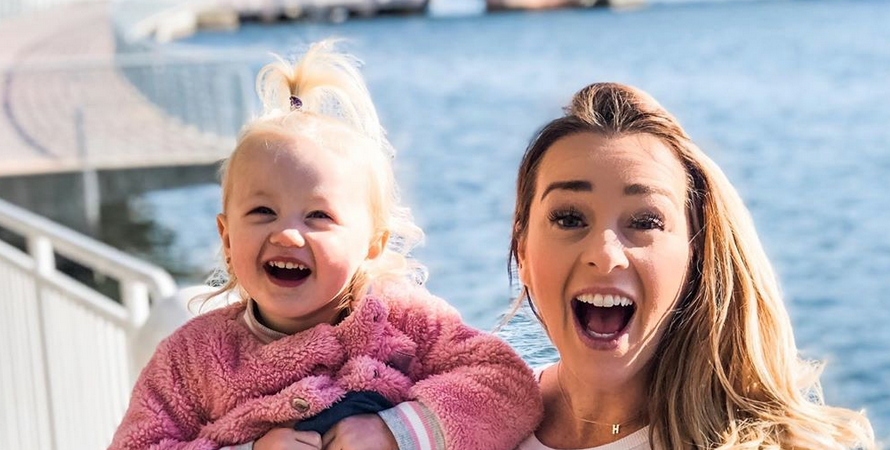 The Bachelor and Married at First Sight star Jamie Otis recently welcomed her second child to the world. She and her husband, who she met on MAFS, have a new family member. Hendrix joined their family in the middle of May. The couple also shares a daughter, Henley, who goes by Gracie. Now, she’s talking about self-love.

In a new social media post, Jamie opens up about self-love and how she feels about her body post-baby. She shares a handful of pictures after giving birth to Gracie and Hendrix. In the post, she talks about how bad she felt about her body after giving birth to Gracie. She wanted to love her body. But, no matter how hard she tried, she still felt negative about herself at times.

This time around, she’s doing much better. She says, “I don’t have post-baby ‘before’ pics with Hendrix and I won’t be taking any either.🙅🏼‍♀️ I’ve got a bazillion “issues” but my body is no longer one of them!👏🏻 I’m gonna sit here with my fourth trimester bump hangin’ out & just LOVE on myself & my baby.🤱🏻 That saying ‘self-love isn’t selfish, it’s necessary’ is so true!🥰⁣”

She reveals that she gained 65 pounds while pregnant with Hendrix. With Gracie, she gained around 45 pounds. She says she’s now the biggest she’s ever been. Despite that realization, Jamie writes, “but I am SO HAPPY to say that I truly don’t care.”

These pics make me feel so much stronger now.💪🏼💗🙌🏼 They’re post-baby “before” pics a few weeks after I had Gracie. Instead of praising myself and my body for creating a healthy, beautiful 8lb 2oz baby girl I stared at the small left over bump and thought, “How soon can I fit back into my clothes?!”🤦🏼‍♀️🙄 NOT going down that viscous cycle this time!💙 ⁣ ⁣ I never shared any of this before bc I was ashamed. I *wanted* to love the skin I was in—I’d encourage others to all the time—yet there I was still battling to do the same for myself.🙃⁣ ⁣ I *wanted* to be body positive. Throughout my pregnancy I reminded myself to love every lump, bump, & stretch that came bc I knew I was so fortunate to even be able to get pregnant, let alone carry a baby to term.🙏🏻🌈⁣ ⁣ After she was born I told myself how amazing it was that I had made my own tiny human!💪🏼 She’s healthy & happy and that is ALL THAT MATTERS. I had that on repeat in my head hoping it’d sink in …..but the negative self talk still continued to sneak up on me.🙄⁣ ⁣ ⁣This time around with Hendrix I gained nearly 65 pounds – that’s about 20 pounds more than I had with Gracie.🤰🏼 I’m bigger now than I’ve ever been. …but I am SO HAPPY to say that I truly don’t care.🙏🏻👏🏻💗⁣ ⁣ Self-love is a journey. It doesn’t happen over night—especially when we live in a world that praises women who “bounce back” after giving birth.🤦🏼‍♀️⁣ ⁣ I don’t have post-baby “before” pics with Hendrix and I won’t be taking any either.🙅🏼‍♀️ I’ve got a bazillion “issues” but my body is no longer one of them!👏🏻 I’m gonna sit here with my fourth trimester bump hangin’ out & just LOVE on myself & my baby.🤱🏻 That saying “self-love isn’t selfish, it’s necessary” is so true!🥰⁣ ⁣ #fourthtrimester #theeverymom #selflove #bodypositive #postpartumbody #postpartumweightloss #postpartum

Jamie gets honest about postpartum life

Since being on reality TV, Jamie has become very open with her 626,000 followers on Instagram. She often shares updates about her life. Along with this comes the good and the bad. Sadly, she had a hard time getting pregnant. So, fans were invested in her journey to welcoming Baby Hendrix to the world.

Since his birth, Jamie has been very open about the ups and downs of postpartum. While she and Doug are head over heels about their baby boy, Jamie Otis isn’t ignoring the obvious. In a social media post, Jamie says, “I don’t know what you think, but I def think the fourth trimester is the hardest trimester… physically, mentally, & emotionally!”

Fortunately, Jamie’s social media followers are rallying around her and encouraging her during this time. They appreciate her honesty when it comes to self-love, postpartum, and more.

So, what do you think of Jamie’s message? Do you agree with what she has to say? Share your thoughts below.

Adam Busby Is Partying It Up In Cancun
Peacock Has HUGE Surprise For ‘Psych’ Fans
Tammy Slaton Hangs Out With New Boyfriend: See Photo
The Bold and the Beautiful Spoilers, May 17-21: Liam Starts To Lose It
Isabel Roloff Comes For YouTubers Nikki & Dan Phillippi, Here’s Why