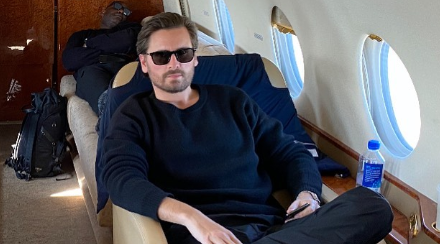 Fans of the Kardashians are familiar with the demons Scott Disick has faced in the past.  Scott and Sofia Richie started dating in September of 2017. The twenty-one-year old had never been in a serious relationship before she got involved with Scott. According to a source, Scott has no hard feelings and thinks Sofia is a great girl.

Scott just had a stay in rehab to work on emotional issues. When he entered rehab the two decided taking time apart to work on themselves individually. Another source said it was Sofia’s decision to end the relationship.

You can thank the LORD & @talentless later, and for the love of god just WASH YOUR HANDS!

Despite their breakup, Scott “has no hard feelings,” the source assured. “She’s a great girl.” The source said she, “tried to be there for Scott and still loves him but at the end of the day, he can only help himself.” Sofia hoped the trip to rehab would have been a wake up for Scott, but it didn’t seem to be the one she needed.

Kourtney Kardashian has supported her ex throughout his struggle according to In Touch. The two escaped with their kids Mason, Penelope, and Reign to the desert. The source said, “she’s helping him get back on the straight and narrow … he’s the father of her kids, and she’s vowed to stand by him on his road to recovery, as long as he continues working on himself.”

The source said Kourtney has,” helped her through troublesome times in the past and is one of the few people who gets him.” Neither Scott or Sofia has talked about their breakup yet.

Scott Holds Out Hope They Will Still Get Back Together

Despite Scott Disick not being surprised they broke up according to Hollywood Life he’s still hoping there’s a chance they will eventually get back together. “A source said Scott has mixed emotions about the whole situation.

They stated, “The last couple of weeks and months have been such a whirlwind for his health and well being that he hasn’t been able to focus on Sofia.” Quarantine is hard on any couple, but especially when there are problems that haven’t been dealt with like the deaths Scott hadn’t faced.

Another said quarantine really forced Scott to deal with his pain. Losing both his parents close together affected him and drove him to enter rehab. Fans were suspicious when Sofia did not wish Scott a happy birthday when the entire Kardashian clan did. Scott has publicly had to deal with his issues and how they effected his relationship with Kourtney in the past. Scott reportedly checked out of rehab shortly after checking in, but fans are hoping he will be able to stay clean and well for his children.