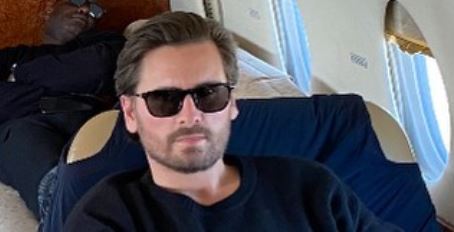 Scott Disick is newly single allegedly because he’s still in “love” with ex Kourtney Kardashian and his family. Sofia Ritchie knew that Scott and Kourtney share a bond together, but hoped he would’ve moved on with her. However, after three years together Scott and Sofia have gone their separate ways. Sofia has tried making their relationship work even with the big age gap between the two. Scott, a dad of three, is 37 and Sofia, 21.

Scott Disick is always going to be in love with Kourtney because she is the mother of his three children. Kourtney and Scott dated from 2006-2015 and share Mason, 10, Penelope, 7, and Reign, 5. He began dating Sofia in 2017 after multiple break-ups with Kourtney because of his addictions and cheating.

I just wanted to thank everyone for supporting my @talentless x @keithharingfoundation collaboration! Available exclusively on TALENTLESS.CO

Quarantine Put A Spin On Things

This quarantine was really rough on Scott Disick and Sofia was taking notice. Scott Disick has always had issues especially with addiction, and that’s always a concern for the Kardashians. Sofia’s family is also aware of Scott’s past and share the same concerns that Disick may go back to his old ways.

A source told Us “Sofia noticed that he wasn’t doing well and gave him an ultimatum, and in the end it seemed like Scott was more focused on Kourtney and his kids than her.” “Scott Disick is always going to be in love with Kourtney, and that’s something Sofia has had to face since even before she got serious with him. The source continued, “It’s been an ongoing thing. It just became more apparent that his family was more of a priority than she was, and his family would be his main priority over anything and anyone.”

Kourtney Kardashian has been hesitant in getting back together with Scott or letting him get close to her romantically. After the many chances she has given him they just couldn’t make it as a couple. Scott has become a great dad to his three kids though. Kourtney and Scott Disick seem to have the co-parenting thing down and even take trips as a family together, but Scott still needs to prove himself to Kourtney.

Recently, Scott found himself struggling and admitted himself to a rehab center in Colorado. This facility released pictures of Scott when he was there a week and he left soon after. Scott went to rehab to work on his past traumas of losing his parents. He never fully dealt with the pain of losing his mother and three months later he lost his father.

Scott Disick and Kourtney’s relationship may be complicated, but they will always share a bond with each other no matter who they are linked to romantically. You can watch what happens with Scott and Kourtney on Keeping Up With the Kardashians on Thursday’s on E!