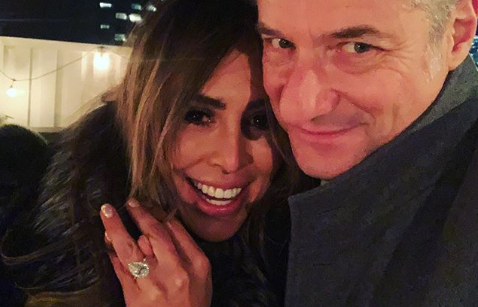 Kelly Dodd teased her future with fiancé Rick Leventhal. The Fox News correspondent listed his New York City apartment where he popped the question. Now, he’s looking forward to starting their new life together in California. The Real Housewives of Orange County star got engaged in November 2019.

The couple isn’t letting the coronavirus pandemic get to them. Kelly and Rick have traveled back and forth to make their long-distance relationship work. Rick Leventhal proposed to Kelly on the balcony of his New York City apartment. She even shared a picture of the special moment. It looks like he’ll be moving with her to California.

Kelly Dodd and Rick Leventhal spend their future together

Per People, Rick Leventhal proposed to Kelly Dodd at his New York City apartment. Now his home is on the market. Kelly broke the news to the outlet on Friday, May 29. It turns out that the couple is planning their lives together. Rick will follow Kelly to California.

“Rick just put his place on the market this week because he’s relocating to California and our new house in Newport Beach,” the RHOC star said. “I will always love that apartment because Rick proposed to me there on his terrace overlooking the city.”

So excited about the write up (@people magazine) did on Ricks NYC APT. It’s For Sale.. link in bio to see the pics . Pray it sells #stjoseph

Kelly noted that Rick’s NYC apartment has brought them “tons of luck.” The couple spent most of their time there, especially amid the coronavirus pandemic. It got them through a difficult time. But, the couple is looking forward to their future together. They’re getting ready for their big move, which could happen soon.

The reality show took to Twitter to share a video of Rick’s apartment listing on Wednesday, May 27. The one-minute video gave fans a tour of his home on YouTube. The three-room apartment is bright and white with an open kitchen and a walk-in closet. The listing reveals that it’s a one-bedroom and one-bathroom home situated in the Kips Bay neighborhood in Manhattan. Rick’s apartment is listed for $825,000 through Gill Chowdhury of Warburg Realty.

Couple previously purchased a home together in California

Per BravoTV.com, Kelly Dodd and Rick Leventhal previously purchased a home in California. He will move from his New York office to the West Coast newsroom to be closer to Kelly. Back in February, Kelly shared an Instagram video of Rick’s new office. She captioned it, “I am beyond excited to have my @rickleventhal working in LA!!! Dreams do happen!!!”

Excited for @rickleventhal to come to CA!!!

The couple met in summer 2019 through Real Housewives of New York City star Ramona Singer during a party at the Hamptons. The couple got engaged in November when Kelly was in New York City for the first ever BravoCon. She shared that beautiful photo on Instagram and revealed that Rick had champagne and flowers in the apartment for their special night.

Rick exclaimed that he felt “like the luckiest guy on earth,” while Kelly said she felt like she “just one the lottery.” The couple wants to say “I do” on October 10, 2020.

Check back with TV Shows Ace for the latest news on Kelly Dodd and Rick Leventhal.

Does Colton Underwood Have A Boyfriend? (No, Not The Plant)
Maddie Brown Brush Shares The Background Photo On Her Phone
Jessa Seewald Makes HUGE Decision After Birth Complications
Jarrod Schulz Wipes ‘Storage Wars’ From Instagram: Off The Show?!
‘Unexpected’ Star Myrka Cantu Flaunts Diamond Ring – Is She Married?