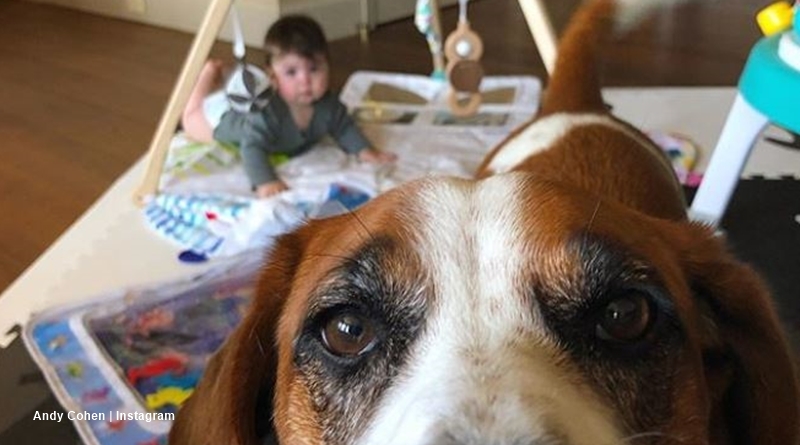 Andy Cohen feels that his rescue dog Wacha might not be a great fit with his son Ben sharing the same home. Andy brought Wacha into his life about seven years ago. The rescue pooch remained a faithful companion over the years. However, Andy now rehomed his furry friend. Unusually, he disabled the comments on his Instagram announcement.

Andy Cohen can’t allow any aggression towards his son, Ben

The Bravo host, as fan know, fell ill with the coronavirus. Back then, he expressed his delight at reuniting what his son Ben after his recovery. TV Shows Ace reported that Andy spoke about the simple pleasures in life. At the beginning of May, he and Ben took a stroll outside. He said, “we got a little stroll around the neighborhood for his first time. It was the purest joy.” In times past, fans saw Andy taking a stroll with his rescue pooch, Wacha. But, there’s no place for the dog in Andy’s life anymore.

Andy adopted Wacha about seven years ago, People noted. Unfortunately, it looks like the dog never really became the pet that Andy hoped for. On his Instagram, Andy Cohen wrote a long explanation. Possibly, he expected some heat from fans for rehoming the dog, as he disabled comments. The last time he did that came in August 2019. He shared a post that said, “Sip back and bottle up! It’s going to be a wild ride as I answer all your summer relationship questions with @Lipton & @Popsugar!”

Wacha sent away for ‘random signs of aggression’

In his long justification, it seems that Andy grew concerned about some “random signs of aggression” by Wacha. In fact, he explained the problem’s not really new. Apparently, something occurred a few months back. Andy looked for professional advice. He said, “numerous professionals led me to the conclusion that my home is simply not a good place for him.” He used the word “catastrophic” when describing the potential effect on his son Ben. Plus, he mentioned that things could turn out even “worse” for Wacha.

It sounds like Andy Cohen feared that Wacha might hurt his son. While he sent Wacha away, fans at least know Andy never sent him back to a shelter. He told his fans that Wacha knows the people where he now lives. When he traveled, they babysat Wacha for him. Andy noted that Wacha seems fine over there. But,  he admitted when he sees him, he feels “a piece of [his] heart is gone.” In fact, he feels that Wacha helped “rescue him” at one stage in his life.

I’ve put off sharing this news as long as I could. As you may know, Wacha is my first baby, my beautiful rescue puppy. He is my pride and joy. When he came into my life, my world changed. Over the nearly seven years that I’ve been blessed to have Wacha in my life, we have worked to address some occasional random signs of aggression. No effort was spared in the attempt to help Wacha feel adjusted. After an incident a few months ago, numerous professionals led me to the conclusion that my home is simply not a good place for him. Keeping him here could be catastrophic for Ben and worse for Wacha. The good news is that he now has a permanent home with his second family, in the place he lived every single time I went out of town. He is thriving. We still see each other, but a piece of my heart is gone. I miss his weight on top of me first thing in the morning. I miss him waiting for me in front of the shower. And I miss the sound of his paws on the floor when I come home. I am not the same person I was when I got him. My dog changed me. He opened me up to love.. to caring… and ultimately to having a family. When I think of him – let’s be honest, when don’t I think of him – it’s with the clarity that we were meant to come into each other’s lives exactly when we did, and that he’s happy, which gives me peace of mind. We did rescue each other. Thank you, Wacha.

It all sounds rather sad. However, people probably understand that if Wacha acted aggressively with Ben, the outcome could be far worse. At least Wacha knows the people where he stays now. And, he sees his adoptive “dad” Andy Cohen from time to time.