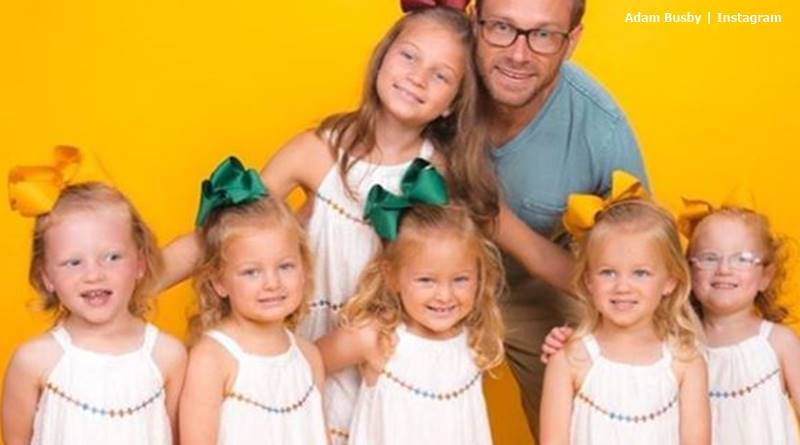 In August 2019, Adam and Danielle Busby launched their Graeson Bee Boutique. The online store proved very popular with fans. Adam often photographs the quints and Blayke wearing the clothing range. And now, he announced they release their brand new additions to the clothing line this coming Monday.

Graeson Bee honors the son they never had

TV Shows Ace reported last year, that the “Busby’s seriously considered the name Graeson.” If they produced a son, it sounded like the name they chose for him. However, that never happened and they now parent six little girls. The daughters all model the clothing in the store. And, it certainly looks like the quint, Parker took to it. In fact, fans hope she becomes a model later in life. Notably, though, not all the clothing in the store is aimed at girls.

On the store site, boyswear also features in the clothing line. The It’s A Buzz World blog explains, “Graeson Bee is [a] mix of boys and girls clothes, matching looks for the whole family, and affordable pieces for moms like myself who have many to dress.” While the current catalog caters for moms, boys, daughters, and babies, so far, nothing sits in the “Men’s” category. Perhaps one day, OutDaughtered fans see them expand into that area.

On his Instagram, Adam told his fans the new line arrives on Monday. He shared a photo of Parker looking fresh in a summery outfit. His caption read, “Love this smile. New @graesonbee line launching Monday.” Fans mostly talked about Parker on the post. One said, “Beautiful Parker with eyes that sparkle and A smile that lights up A room!!” Another one noted, “She is happy when she is modeling😀. She could be a top model in the future.”

Over on the Graeson Bee Page, a photo of the new lines showed Blayke and Parker, alongside Danielle. The OutDaughtered mom reminded fans to set their notifications on so they don’t miss out on the new line. She said, “You won’t want to miss the adorable summer everyday pieces we have ready for you and your little ones!”

Plenty of fans liked the post. So, it seems that the line grows in popularity. Judging by the comments, many people rather like the line of rompers.

Other photos showcase their upcoming “berry print twirl dresses.” Plus, Busby fans said they like the button-up cami tank that Danielle modeled. Summer comes very soon, and fans can’t wait for it. Winter, combined with social distancing and quarantine seems to have lasted for about a thousand years, fans think.

🚨 GBB SHOPPERS 🚨 Turn on your post notifications and set your alarms because NEW ARRIVALS are coming MONDAY June 1st at 2PM 😍 You won’t want to miss the adorable summer everyday pieces we have ready for you and your little ones!!! ✨ Tag a friend in the comments below who also loves shopping! #graesonbee #graesonbeeboutique #looksforthefamily #shoponline #onlineboutique

What do you think of the clothes that the Graeson Bee Boutique sells? Did you ever buy from the Busby business venture? Sound off in the comments below.