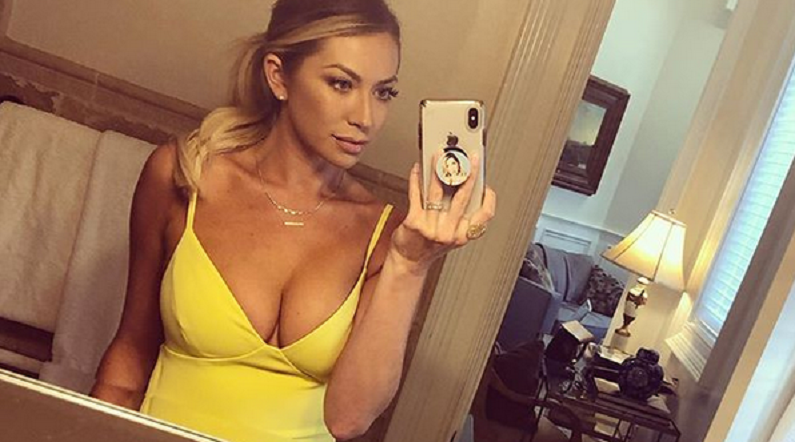 Stassi Schroeder has a new outlook on wedding planning. And that’s all because of the coronavirus pandemic. Beau Clark popped the question in July 2019. He planned the special occasion. The super-dedicated boyfriend took Stassi to a graveyard to celebrate their special day together.

She was so surprised by the proposal. But once she had that ring on her finger, everything changed. Stassi wasn’t afraid to call herself a bridezilla on Season 8 of Vanderpump Rules. Beau looked nervous as she came up with ideas for their big day. But nowadays, Stassi has a laid-back approach to wedding planning.

Stassi Schroeder and Beau Clark previously announced their plans to wed in Italy in October 2020. But those plans are on hold due to the COVID-19 outbreak. The crisis impacted Italy and the U.S., as well as many other parts of the world. Per Us Weekly, Stassi has become less of a bridezilla since that epic proposal. She also revealed during an Instagram Live chat that they’re trying to stay positive right now. The VPR cast member doesn’t feel that planning her wedding is a priority right now.

“We’re trying to stay optimistic that things will sort itself out,” Stassi said. “I was thinking about the other day. I was like, ‘Well I already have my dresses,’ but are people actually making them right now? Because that’s not essential. You know what I mean?”

The Next Level Basic author revealed that she wasn’t confident that her dream wedding would ever happen. Due to the global pandemic, Stassi is no longer the bridezilla she once was. She has a relaxed approach to wedding planning. She doesn’t even care where they get married or how long their guest list is.

“I’m so easy-going now because I don’t care about testing the food. I don’t care if the flowers are wilted,” Stassi revealed on her Friday, May 15 podcast episode. “I just want to get there and once we’re able to get to Rome, I don’t care if only five people show up. The fact that I’ll be able to be there is all I care about. It could be a ratchet wedding in Italy and I’ll be fine.”

On her “Straight Up With Stassi” podcast, she also revealed that they’re hoping to tie to knot in October 2021.

Stassi Schroeder and Beau Clark still have plans to wed in Rome. The reason why they chose that location is that they want to have a smaller wedding. She also feels that Italy has “a lot of meaning” for the couple. Beau’s family is from Italy.

“There are a couple of reasons my fiancé, Beau, and I wanted to do a destination wedding,” Stassi explained. “The first is that we wanted a smaller wedding. I’ve been to weddings with 400 guests and seen how the bride doesn’t get to talk to everyone. The whole night is a blur.”

Stassi originally didn’t want bridesmaids. She didn’t want to be that girl. But she ended up choosing nine of her closest friends and family members. While their wedding has been pushed back, Stassi told Us Weekly in February 2020 that she’s already worked on her vows.

“Whenever I think of something, I go into my phone and put it in my notes,” she said.

As for filming their wedding, the couple traveled to Italy with a producer to ensure they would choose a venue that would agree to film the wedding for Vanderpump Rules.

Check back with TV Shows Ace for the latest news on Stassi Schroeder and Beau Clark’s wedding.

‘Sister Wives’: Christine Brown Gives Robyn A Big Slap In The Face With Latest Move?
Mama June Reacts: Rumors She’s Sleeping Around, Relationship Status
‘Welcome To Plathville’: Why Isn’t Hosanna Plath On Her Family’s Show?
Carlin Bates DRAGGED For Making Everything About Herself
Is Natasha Parker Open To Being ‘The Bachelorette’ After ‘BIP’ Drama?