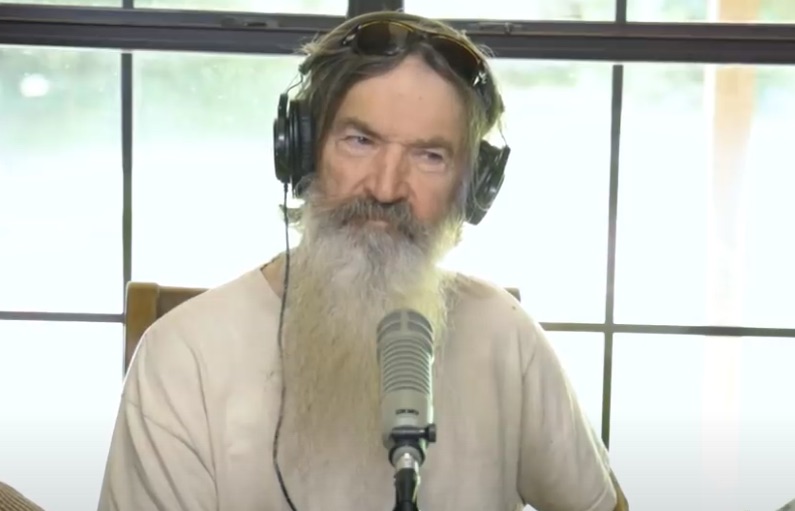 Duck Dynasty patriarch Phil Robertson just found out he has a daughter. Thanks to DNA testing, Jep, Willie, Jase, and Alan found out they all have a sister named Phyliss. What is the story of this previously unknown relative?

On his weekly podcast, Duck Dynasty star Phil Robertson shocked fans by revealing that he has a 45-year-old daughter from an affair. In the Unabashed with Phil Robertson episode entitled “How Phil Robertson Met His Daughter,” Robertson and his four sons told the story about Phyliss, the daughter that Robertson never knew about.

Of course, everyone knows who the family is, right? Phil Robertson, his wife Kay and their four sons, Jep, 42, Willie, 48, Jase, 50, and Alan, 55. But, sandwiched in between Jep and Willie is daughter Phyliss, the result of an affair.

How Phyliss Learned Phil Robertson Was Her Father

Phil Robertson’s daughter found him through a DNA search. She wrote letters to Jase and Al, explaining that they could be family members. She thought that their dad could be her long lost dad. It took them a while to really notice the letters, as they generally only get requests for autographs.

Although the brothers admitted at first, they were doubtful that this unknown woman could be their sister, but after looking at a timeline of their father’s life, they realized that this was very possible. Al admitted that “There may be something to this.”

The guys didn’t want to disrupt the family until they were totally sure. So, they kept it all hush hush. What they did know is that this woman needed to find her father. They needed to help her solve her mystery so that if this was untrue, she could continue on with her search. They knew this was a “life-changing” situation.

So, they had their cousin contact her. The guys didn’t know if she was someone out looking for a big payday or what. The cousin talked to her, found out she was also a devout Christian and the brothers felt satisfied enough to talk to their dad about doing a DNA test.

Phil took the test, and Phyliss retook the DNA test, both from the same company. The results? 99.5 percent match. So, the two had more in common than similar names.

They later learned that Phyliss had actually gone to their church to check out the Robertsons and meet Jase.

Jep calls the discovery of a new sister “a dream come true.” Jase decided he loved his new sister when that DNA test confirmed they were related. Willie feels “so good” about this new family member and jokes, “welcome to the nuttiest family around.”

They have reunited with their sister on many occasions. Now, they want the world to know their new sister Phyliss.

According to Yahoo, Phil Robertson had a “former life.” Although he married 17-year-old Kay, the Duck Dynasty patriarch admits that he was cheating on his young wife. He was also drinking to excess and using drugs. Sometime in the 70s, he gave that all up and converted to Christianity.

Phil admits that when Phyliss first contacted him, he was a bit “fuzzy” about the whole thing. But, Kay set him straight. She said it was very possible that this woman could be his daughter.

In addition, Kay has been terrific about meeting Phil’s daughter. Robertson uses his faith to understand this situation. He says, “We know that in all things — in all things — ‘God works for the good of those who love him, who have been called according to his purpose.’”

So good finding my long lost sister. Can’t wait to share life with y’all’s family. Welcome to the nuttiest family around. [link in bio to hear us tell the story]

Are you shocked by Phil Robertson’s news? What do you think of the Duck Dynasty star’s reunion with his long lost daughter? Be sure to check back with TV Shows Ace for all the latest television and reality news.